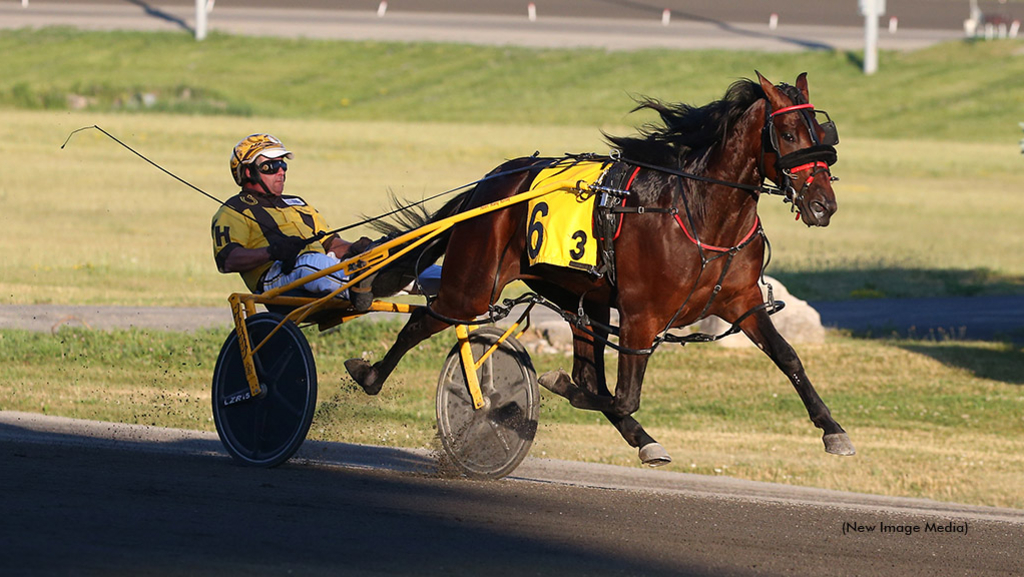 The Ontario Sires Stakes Gold preliminary season for two-year-old pacing colts and geldings wrapped Sunday night (Oct. 2) at Flamboro Downs with Moment Is Here earning his breakthrough victory at the top level of the provincial program in the lone $156,300 division.

A gelded son of All Bets Off, Moment Is Here came into the night with a record of 0-1-1 from three OSS starts and added a win to that tally thanks to a well-engineered pocket trip by Trevor Henry.
Seven sophomore pacers lined up when the gate rolled, with two of them intent on making the lead.
Santana Hanover and Bob McClure battled early with Sounds Good and Jody Jamieson. The result was Sounds Good parked outside through a :26.4 first quarter while Henry and Moment Is Here settled in on the pylons.
“Bobby’s horse, he’s kind of a funny horse,” said Henry. “He doesn’t really go until he’s challenged, and he couldn’t really let Jody go, so I got to the two-hole, and it all worked out.”
The status quo remained unchanged through a :55.3 second panel before the Arthur, Ont. resident moved his horse down the backstretch. Santana Hanover was game against his pocket-popping challenger and dueled on the lead with Moment Is Here until the pair exited the far turn and Henry’s horse charged home for the win in 1:53.4, which matched the OSS all-age pacing gelding record as well as the Flamboro track record for two-year-old pacing geldings.
“He raced tough that colt,” said Henry. “Mine was getting doubled up in the two-hole, and since we weren’t going much at that point, and I thought mine was good enough to beat him, I figured I’d move him there and eventually he did get by him.”
The victory was the second overall of Moment Is Here’s freshman campaign as he increased his career earnings to over $188,000 with the win.
He also solidified his spot in the $225,000 Ontario Sires Stakes Super Final on Oct. 15 at Woodbine Mohawk Park, where he will go up against freshman pacing star Stockade Seelster, and the rest of Ontario’s top two-year-old male pacers.
“He’s just got to stay sound and healthy,” said Henry. “He’s every bit as good as the rest of them. If he gets the right trip, he will be right there.”
Robert McIntosh bred Moment Is Here out of the No Pan Intended mare Breathtacular. The Windsor, Ont. resident trains and co-owns the colt with Al McIntosh Holdings Inc. (Leamington, Ont.,), Frank Baldachino (Harvey Cedars, N.J.), and Mardon Stables (Loretto, Ont.).
Santana Hanover held on for second place, good enough to move him inside the top 10 and secure his spot in the Super Final after starting the night in 11th on the leaderboard.
Scott McEney of Puslinch, Ont. trains the Big Jim gelding, who now has a record of 2-4-1 from nine starts this year for Hamilton, Ont. owner Domenic Chiaravalle.
Rounding out the top three tonight was Gregg McNair-trained Whatchulookin At. The Hes Watching colt is owned by McNair, Jim Newton (Saskatoon, Sask.), Bloomingwood Farms Ltd (Harriston, Ont.) and Paul Kidd (Guelph, Ont.). Doug McNair was in the race bike for the show finish.
To view Sunday's harness racing results, click the following link: Sunday Results - Flamboro Downs.
Tags
Flamboro Downs
Moment Is Here
Ontario Sires Stakes
OSS
OSS Gold
track record
Most Popular Stories