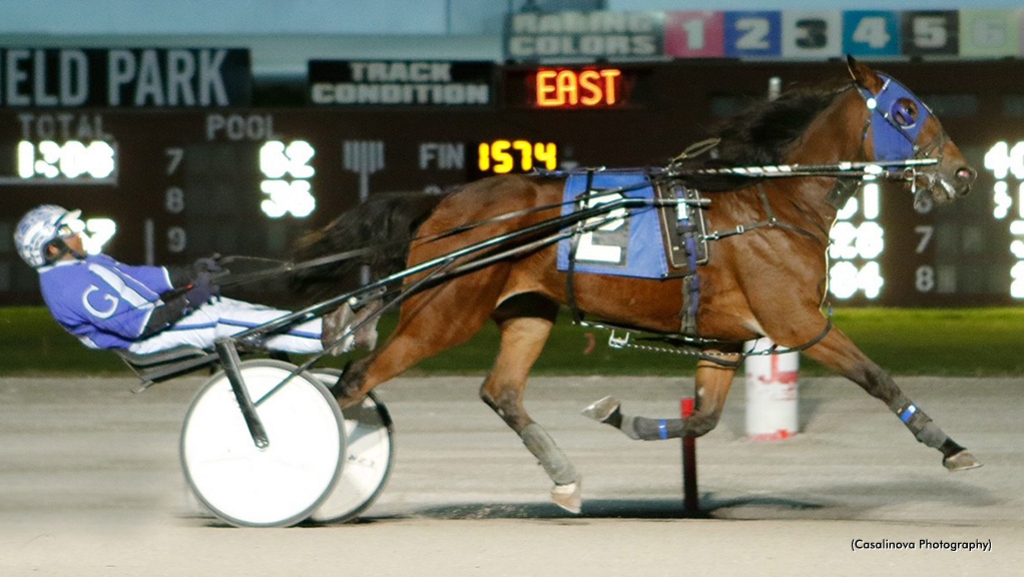 Gillespie, the winningest driver on the Ohio County Fair circuit this year, won the first championship of the night with Mission Valley and closed the evening winning the final championship race with Type A Personality.

In the first $40,000 championship of the night, for two-year-old trotting fillies, Gillespie sat Mission Valley (pictured above) in the pocket, swung wide at the top of the stretch and fired past Frantastic L, who led the entire way to win by two lengths in 1:58. It was the eighth win of the year in 15 starts for the daughter of Enterprise, who raised her earning to $58,252. Gillespie trains Mission Valley for owner Susan Sickle. Frantastic L was second with Dopotutto third.

In the two-year-old filly pace, Miss Maddie P and Aaron Merriman took the long way in winning the championship in a lifetime mark of 1:55.2. Miss Maddie P was sixth at the quarter before making her move going to the half.  Merriman pulled the Fear The Dragon filly three wide up the backstretch, grabbing the lead from Cruisin Barcie and held on to win by a neck. Cruisin Barcie was second with Lady With No Fear third. Miss Maddie P is owned by SCP Stable and trained by Steve Carter. The win was the filly’s eighth of the year in 17 starts. She has earned $59,301 this season.

The duo of Don Irvine Jr. and Rosy Weaver teamed to win the two-year-old colt trot with Republic Return. Irvine rushed the 2-5 favourite to the lead and never looked back, going gate to wire to win in 2:01. The win was the 13th of the year for Republic Return and ties him for the most by any two-year-old in North America. He has now earned $75,407.  Weaver, the winningest trainer on the Ohio fair circuit this year, owns and trains the Global Republic S gelding with Heartland Acres. Dravo finished second with Chips Caviar third.

In the first three-year-old race of the night, Secrets By The Sea — with Chris Page driving — took the lead just past the half and won the championship for sophomore fillies in 1:54, tying her lifetime mark. The daughter of Downbytheseaside won for the seventh time this year, raising her earnings to $53,673. Page co-owns the filly with Jerry Daugherty. Tim Grubb trains Secrets By The Sea. McAngel finished second with Osceola Hanover third.

Stoney Ridgetop made it seven wins in a row and 10 of her last 11 as he claimed the three-year-old filly trot. Page sat second with Stoney Ridgetop through fractions of :27.1, :56.3 and 1:25.4, pulling just past three-quarters and cruising to victory in a lifetime mark of 1:55.4. John Konesky III trains and co-owns the Wishing Stone filly with his son Patrick. The win upped Stoney Ridgetop’s earnings this year to $60,621. Baker Time rallied to finish second with A True Dream third.

The biggest upset of the night came in the two-year old colt and gelding pace. Dunkin, a 75-1 shot with Nick Clegg driving, went three wide up the backstretch and battled coming home, hitting the wire first in 1:54.4 to win by a head. It was the sixth win of the year for the Pet Rock gelding who set a lifetime mark. Dunkin has now earned $43,361 for owner and trainer Betty Clegg.  Hesa Bully finished second with Master Confection third.

In the final championship race of the night, Gillespie grabbed his second title as he guided Type A Personality to a victory in a mark of 1:53.2 for trainer Ryan Miller. Gillespie sat Type A Personality in the pocket, grabbed the lead around the final turn and pulled away to win by three lengths. It was the 10th win of the year in 22 starts for son of Fear The Dragon. Owned by Miller Racing Stable and Janie Hartley, Type A Personality has lifetime earnings of $71,199. Surfinthecanyon was second with Medoland Terror third.