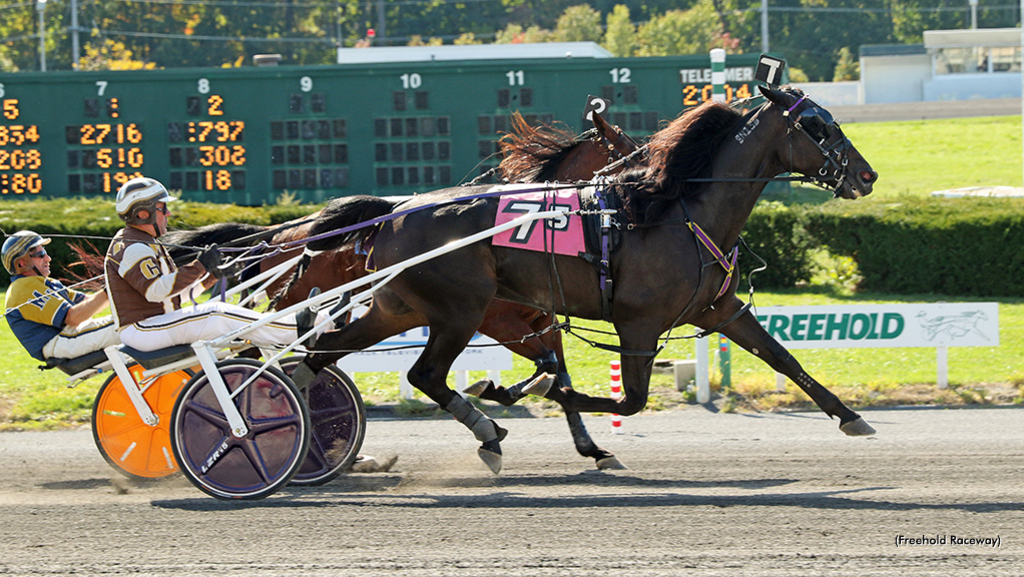 As your parents may have told you, goods things come Allindotime, and John Calabrese found that saying to be true Saturday afternoon (Oct. 15) in the Amateur Harness Drivers Club (AHDC) Trot at Freehold Raceway.

Leaving from post six, in what was by far the best-bet race on the Freehold card today, Calabrese chose to lay back with his trotter and come at the pacesetters late. The crafty reinsman watched Mike Polansky send his own My Big Kadillac to the lead, forcing Mark Schullstrom and Inukchuk Chuck to take back into the two hole. Surprisingly, the first quarter went in a meager :30.4, causing some worry from Calabrese while sitting sixth at that marker.

"When I saw that first quarter, I began to think I was not in such a good spot," Calabrese said. "But Allindotime has been getting better each week, so I showed him some daylight and he did the rest."

Doing just that, the duo pulled out second over behind Winneress and Anthony Verruso. The tandem made up ground going into the third turn. But then passing the five-eighths pole, Schullstrom pulled the pocket and tried to storm past My Big Kadillac to the lead. Mike Polansky was having none of that. He rebuffed the quick quarter move, leaving Inukchuk Chuck on the outside as Winneress ducked into the pocket and Allindotime swung three deep to take his run at the leader. As the horses battled through the stretch, Allindotime wore down the front-stepper to prevail by a half length, stopping the timer in 2:00.4 seconds. My Big Kadillac held the place spot with Winneress garnering the show dough.

Allindotime, a seven-year-old Andover Hall gelding, is owned by Alma Iafelice and is trained by Bill MacKenzie. Sent off as the favourite, Allindotime returned $4.20 on the win end for his loyal backers.

AHDC action returns to Freehold next Saturday (Oct. 22) with another exciting trotting event.