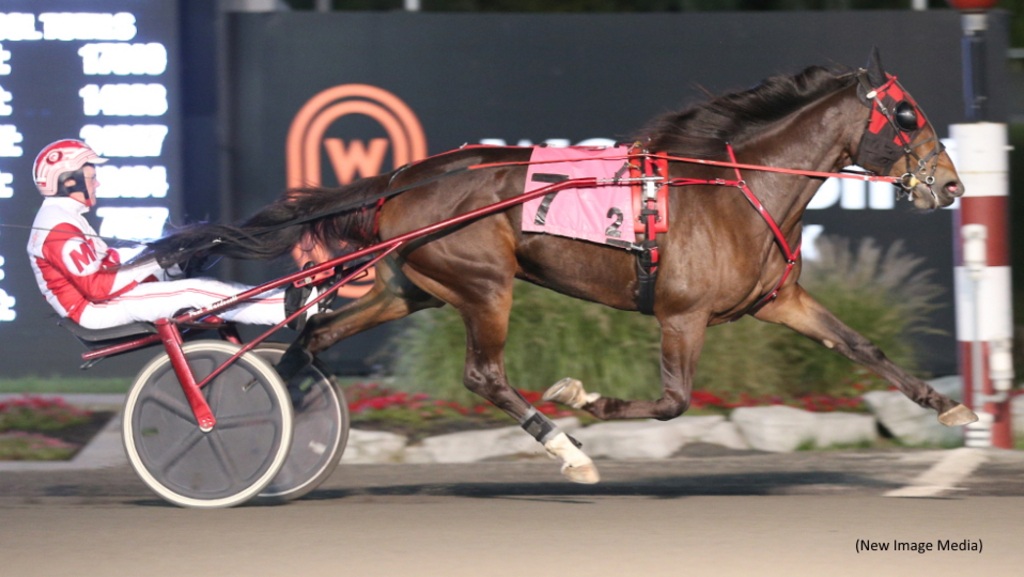 Terrific trotting two-year-olds, a tongue twister that doubles as the 2022 slogan for John Bax’s stable. Heading into the Ontario Sires Stakes Gold Super Finals at Woodbine Mohawk Park, Bax has a five-pack of freshman trotters taking aim at the winner’s share of the $225,000 purses they are competing for.

Leading the way is star filly Righteous Resolve (pictured above). The Bet Max Stables Inc. and Benenati Inc. homebred has been nearly flawless, winning seven times from eight starts, including a trio of OSS Gold wins, a sweep of the Peaceful Way elimination and final, and a stakes record romp in the Champlain.

“I trained her in Florida and she wasn’t anything special, but a month after being home, she switched on and away she went,” said Bax. “It’s all different, some you know right away and other one’s surprise you.”

Righteous Resolve is a full sister to 2021 O’Brien Award winner Duly Resolved and is by Resolve out of the stakes-winning Muscle Mass mare Motown Muscle.

“What makes her special is that she is versatile,” said Bax. “She’s pretty push button. [Driver Paul MacDonell] can leave with her, he can sit back with her, he can kind of go when he wants. That always makes quite a difference when you can race a horse different ways. If you always race them one way, everyone catches on and it’s a little tougher. What makes a good horse a better horse is usually that they are versatile.”

MacDonell will be in the bike on Saturday night, leaving from post three as Righteous Resolve looks to improve on her impressive $423,724 in earnings to date.

Bax, a resident of Campbellville, Ont., is also harnessing Its Your Choice. The Muscle Mass-Choice Hall filly has six on the board finishes in seven starts this year but has yet to break into the winner’s circle. James MacDonald will pilot Its Your Choice from post six. She is owned by Al Libfield, Marvin Katz and Lynn Katz.

On the male side of the juvenile trotting division, Snowpiercer and Oh Look Magic both look threatening heading into the Super Final.

“Training down we thought Snowpiercer was pretty special and were a little surprised by Oh Look Magic,” said Bax. “He kept going with everybody but you’re thinking he will hit a wall sooner or later, but he never did.”

Snowpiercer, a $130,000 purchase at the 2021 Lexington Selected Yearling Sale, picked up a Gold win early in the campaign. The Muscle Mass-Wheely Quick colt draws in to post eight, with Paul MacDonell driving for owners Bax Stable, Brad Grant, David Anderson and Richard Gutnick.

Oh Look Magic, a Glengate Farms homebred co-owned by Bax Stable and The Cavalier Stable, threatened early in the Mohawk Million, but after a hard-working, parked-out first quarter to make the lead, he was unable to hang on when the field spun for home.

The Lookslikeachpndale-Miami Magic gelding has won four times this year and three have come from on the lead at the quarter pole. Matt Bax will drive him from post nine on Saturday night.

“You usually have to let him do his thing off the gate and then after that, he’s a little easier to handle,” said Bax. “If they move along, he can sit in a hole and be good. He’s got the outside, so we will see how it transpires. At this point in the year, you like to say everything is a bonus.”

The final Bax two-year-old trotter is Deadline Hall. From nine starts, the Muscle Mass-Daylon Mystique gelding has a record of 0-2-1 and has earned $46,378 for owners Bax Stable, Steve Organ and Rick Heinz. Chris Christoforou will drive from post three.

Bax’s sixth and final starter of the night is in the three-year-old trotting colt and gelding division, and it’s a familiar name to fans of the OSS: Duly Resolved.

The runner-up in the 2021 Super Final is coming off an impressive outing in London, Ont. at The Raceway at the Western Fair District, where he set an all-age trotting track record of 1:55.4 in a Gold division.

“Duly Resolved raced super last week in London. My daughter is an animal osteopath and she’s been working hard on him, and a lot of them,” said Bax. “We think that is a big benefit. With Duly Resolved, we had stomach and allergy issues, but he seems to be coming around now. So, I am hoping for a good end of the year with him.”

The final piece of the puzzle for Bax on Saturday night comes in the form of the season-long Johnston Cup, awarded to the top trainer in the Ontario Sires Stakes, one of the few accolades that has evaded the veteran trainer.

“It would be nice. I look more at the dollar signs on the right-hand side than the points,” said Bax. “But it would obviously feel pretty good. It’s always nice to be up there."