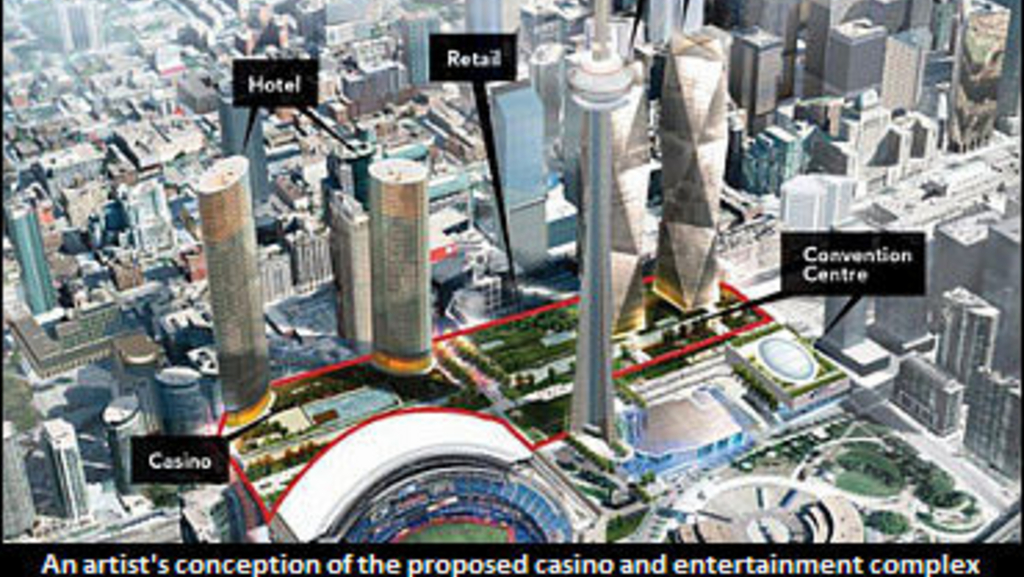 On Friday, October 12, the Oxford Properties Group announced its proposed vision for a $3-billion expansion right along downtown Toronto's Front Street. The proposal includes the Metro Toronto Convention Centre, and, in addition to a full-blown casino, features office, retail, hotel and residential elements.

An Oxford press release regarding the proposal explains that the undertaking would also ultimately feature a 5.5-acre 'urban park' created over the existing rail lines. The proposal also touts the fact that the expansion would be integrated right into the existing transportation infrastructure, which is also located right alongside one of the most congested urban areas on the continent.

The Oxford announcement states that the casino element of the expansion would be 'funded, built and operated by the casino operator selected by the province.' The release also characterizes the ultra-urban Front Street site for the proposed expansion as, "within a vibrant local residential neighbourhood in the centre of Toronto's theatre and entertainment districts."

The stakes over expanded casino gaming in the province of Ontario could not be any higher than what they currently are, nor could the appetite of major casino interests from the United States, which have, almost literally, been chomping at the bit for a piece of Toronto's lucrative gaming pie. There has been absolutely no secrecy about the massive casino lobby which has set up shop in Ontario's capital. This has all been going on as the minority Ontario Liberal Government, via the Ontario Lottery and Gaming Corp., is in the midst of putting in upwards of 60,000 Ontarians out of work by quizzically pulling the mutually-beneficial and highly lucrative slots-at-racetracks program.

The province's major opposition parties --- the New Democratic Party and the Progressive Conservatives --- have spoken out, calling for referendums to become mandatory before casino expansion is given the green light in municipalities. Motions and bills have been presented, although, at this point, it is all talk.

Another who has been talking quite a bit against urban casino expansion in the heart of downtown Toronto is Councillor Adam Vaughan, who, as a report by The Globe and Mail explains, has said that any expansion of Oxford's nature would kill independent business, and that the action could be equated to "a bomb going off in the downtown core.”

The Ontario Liberal Party --- via the OLG, which it governs --- has made it quite clear that it does not support the idea of municipalities conducting referendums to truly find out if residents actually want full-blown casino expansion in their own backyards.

(With files from The Globe and Mail)

With regards to a connection

With regards to a connection between Oxford Properties (the real estate arm of OMERS) and Larry Tannenbaum, here are a few quotes from Investor Voice dated May 3, 2004:
"One of Canada's largest pension plans is facing tough questions about how it handled an outsourcing deal involving nearly one-third of its assets, which cost the plan almost $100-million in the past 12 months alone.
The unusual arrangement involving the creation of a new merchant bank, Borealis Capital Corp., which was managed by former employees of the pension plan, ultimately turned out to be an expensive and unnecessary escapade.
The investigation found that: As part of the buyout in February, OMERS paid Toronto businessman Larry Tanenbaum's company, Kilmer Group, $15.7-million for its 10.5-per-cent stake in Borealis. That was nearly 2.5 times what Mr. Tanenbaum paid for it in 2002 and $7-million more than OMERS' board wanted to spend." So, I guess we can say that Oxford and Tannenbaum have done business in the past and in a radio interview yesterday, Blake Hutcheson, President and CEO of Oxford mentioned that they will be looking for companies to partner in this endeavour.

In reply to Why not expand what we have by Greg

That new casino will be

That new casino will be beautiful.I can hardly wait!

Some of these people in the

Some of these people in the liberal party (and others) will not be around come the next election, but they are trying to make sure their feet are well implanted in the gaming business so they can fill there pockets as privateurs (SHARE HOLDERS).If the cityzens let these kinds of gouvernment do as they please, I can see TORONTO becomimg another SIN CITY (LAS VEGAS) or should I say LOST VEGAS, and tax payers, get ready to dig a little deeper into your pockets, for the last ten years, CASINOS have been losing money, IN THE RED.We have got to be the most ignorant people this side of the RIO GRANDE to let these LAWYERS (LIARS) run our country, steel our hard earned dollards right out of our pockets, while they live a life stylle like the RICH and the FAMOUS, with their grandios parties and dinners, and then turn around and pat us on the back and say,(KEEP UP THE GOOD WORK SON, YOUR DOING A GOOD JOB,DON'T FORGET WE ALL GOT TO EAT.BEWARE OF THE BIB BAD WOLF,HE'S GOING TO GET YOU. HAVE A good day.

Oxford Properties Group now 3 guesses who are the front men for them and the actual ownership behind the scenes?? Just ask me!!

Why not expand what we have

Why not expand what we have and keep the partnership?

Better dig deep on this one

Better dig deep on this one and quickly! Check out the principles both visible and silent if you can. See if Godfrey or Tanenbaum have any connection here, although doubtful that any tracks would not be covered so well, that no trace will be found! Obviously there has been some monetary gain to some, of course also not traceable!!!

How about building a casino

How about building a casino on top of the CN tower?