"Pricing Is Too High" 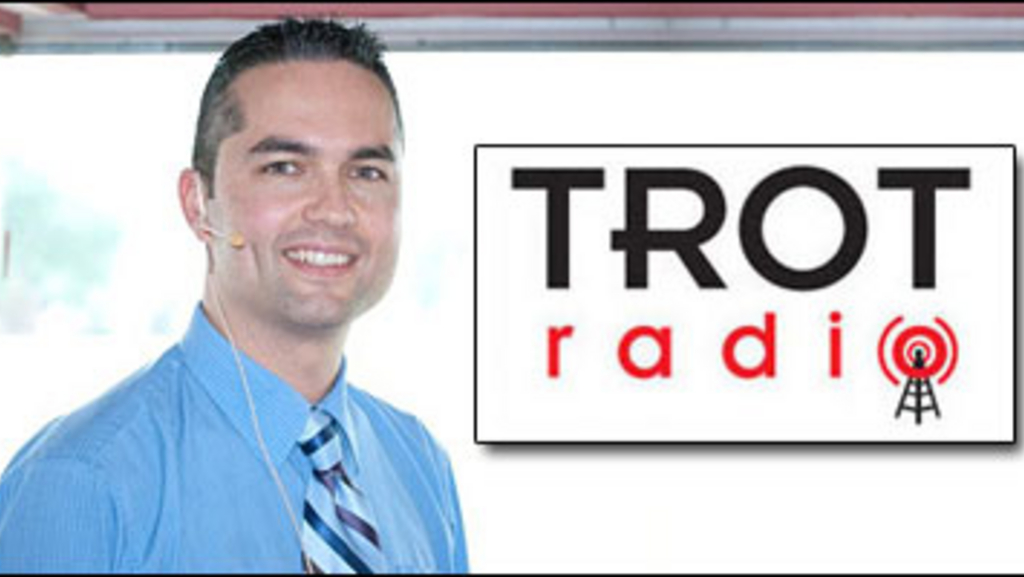 "I don't know if there is a consensus [on takeout] to be honest. When some of the people down there heard I was on this panel, they sat me down and said 'you can't really think that reducing takeout is a good idea.'

From that perspective, it kind of set me back a little bit."

Greg Blanchard, the man behind the microphone and in the race office at Western Fair is today's guest on Trot Radio. Blanchard talks to Norm Borg fresh from speaking at the annual TRA Simulcast Conference in Arizona where he was a panelist discussing takeout.

"In terms of racing in North America every track has a different set of circumstances, so there are many different viewpoints still on the takeout issue. I'm a believer that the pricing is too high in general terms and we have to work at bringing that down to a more competitive level if we're going to able to compete with other forms of gambling."

Western Fair embraced the takeout movement last year by offering a Pick 4 with 15 per cent take. With the Fall meet, the track will add another wager to that menu.

"We focused on the single wager last year, the Pick 4. This year we're going to add a Pick 5 with the same 15 per cent takeout rate. But then you've got a guy like Raj Mutti from Fraser Downs who was much more aggressive in his approach. They're pretty happy with what they've seen so far and I think they're going to continue to work at lowering the takeout on some of their other wagers. We'll monitor tracks like that very closely."

Western Fair gave the horseplayers a rare voice in May when the track partnered with HANA on a Pick 4 wager. Blanchard indicates that the response was very good and hopes that the track will do that again.

"At the end of the day we created an almost $10,000 pool which the previous year was I think $3,200. We're not talking huge numbers but we're talking a big increase and, in general, we saw the overall Pick 4 pool size triple by the end of the year."

It's a new era for Western Fair, rebranded as the Western Fair District. Blanchard feels the name will help with brand awareness as people simply associated Western Fair with the popular 10-day September carnival.

"It's part and parcel now with venues that have added gaming, ie. slots and maybe other lines of business to let people know there's a lot to see and do here in terms of entertainment and gaming. Within that we've changed the name of the racetrack to The Raceway at The Western Fair District. It's a bit of a mouthful but people will get used to that and I think they'll like the new look we'll be presenting on the TV broadcasts."

Blanchard and co. are pleased with the strong field set for the track's Friday opener as Western Fair starts its Fall harness racing meet at 7:05 p.m.

"It's stronger than the typical Friday card we would see last year when we were racing five days a week. We're pretty happy."

To listen to the full interview with Blanchard and Borg, click the play button below.

Please note that the opinions expressed in the featured interview are those of the participants and do not necessarily reflect Rideau Carleton Raceway and/or Standardbred Canada.

Here is a major point that

Here is a major point that those in the race game continue to miss. As the wager continues to plummet the race game continues to be less relevant and as the wager continues to fall and the game gets less and less relevant there will come a time where the politicians realize that the public as a whole simply does not care or support the race game and it will be easy for them to justify taking the slot revenue away from them, it can and will happen if the wager falls to far. The race game needs to reverse this trend but it seems they are only interested in band aid solutions such as guaranteed pools which will not bring back former big players or attract the next generation of gamblers.

There is one real solution and it is the only one that has a chance of reversing things and that is by competing with other forms of gambling by reducing the takeout to a max of 10% or less in every pool. The longer the race game continues to fool themselves into believing they can be priced 3 or 4 times higher then there competition and compete for there share of the gambling market the more long term damage they are doing to the industry. The damage they have already done may already be irreversible.

Lower take-out does not mean

Lower take-out does not mean less money goes into the purse accounts. It's called churn. The more money that goes back into the players pockets....the more they will wager or re-wager. The tracks will make the same or more money on the take-out but they will just have to work a little harder for it.

Consider this, if you get

This is the purse for only two races. I would wager it does not cover the operating expeneses for a single card.

Try this and see if your handle increases ten percent. If I remember correctly, Balmoral had a larger increase than that when they dropped the take out.

For a facility that has such a small handle, I believe this would be an acceptable risk.

Greg is right the pricing is

Greg is right the pricing is to high and one thing that you can count on is that excessive takeout will slowly but surely kill the race game. Reducing the takeout to 15% will only slow down the bleeding it will not stop it. Speaking for myself a former big player i will never again bet a race unless the takeout is 10% or less and it has to be a harness track with a million plus handle and these tracks are becoming extinct. Many other large players like myself have walked away and are now playing other forms of gambling where as a player you at least have a chance. The next generation of gamblers scoffs at playing the races and spending there money on a form of gambling where it is next to impossible to win.

When it comes to pricing the race game is stuck in the 60's and 70's and as a group they are unable to figure out why people will no longer support them. They refuse to accept the fact that they are no longer the only game in town, there competition is no longer other race tracks but other forms of gambling that all have much fairer house takes. I have said on here for the last 2 or 3 years that excessive track takeout would be the final nail in the race games coffin and i have seen nothing yet that changes my mind. The race game is no closer now to getting there act together then they were 20 years ago when the decline started and it has reached a point in time where i no longer even feel sorry for them. They refuse to change with the times, they refuse to see the obvious so they are getting exactly what they deserve.

15% must stil be reduced to

15% must stil be reduced to 5% to compete with other fair gambling venues. Instead of increasing purses start catering to the alleged "customers"(the bettors) and use the slot revenue to decrease the handle. If not you will and are "running out of racetrack"!!