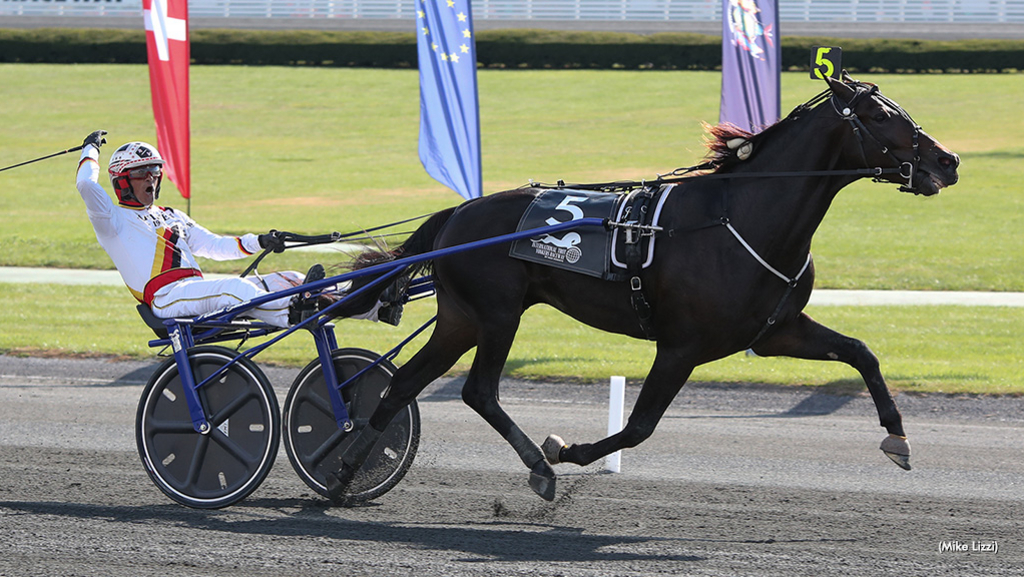 Six International trotters have arrived at JFK airport in New York – with a final destination of MGM Yonkers Raceway – to tackle four currently racing in North America in the Oct. 15 MGM Yonkers International Trot. The $1 million event for older trotters anchors a strong afternoon card that kicks off at 12:30 p.m. (EDT) and includes a pair of $250,000 Invitationals.

Representing France, Etonnant has won 20 of 81 races and over 2-million Euros. Most recently, he won at Vincennes on Sept. 10 at 2,700 meters and has finished no worse than second in his previous five starts. Trainer Richard Westerink has secured regular driver Anthony Barrier to handle the lines.

Zacon Gio returns to the New York scene as he attempts to relive the greatest victory of his career. Back in 2019, he won the last MGM Yonkers International Trot in 2:24.1 while representing Italy, and trainer Holger Ehlert is back with driver Robert Vecchione looking for the repeat.

Also making the long trip across the Atlantic Ocean are a number of well-decorated trotters from all over Europe. Norway sends a pair of hopefuls in Cokstile and Stoletheshow. The former is the 2020 Elitlopp winner while the latter is the Norwegian championship winner.

The Swedish-bred Kennedy will carry the flag for that nation. While coming off just a fifth-place finish in a Grade 3 at Vincennes in France, he reeled off five consecutive victories during the spring. The final international shipper is Tycoon Conway Hall from Denmark, a 12-year-old who was one of the fastest horses in Europe earlier this year.

With the previously announced Atlanta pulling out of the event, the United States will be represented by Its Academic and Back Of The Neck. Millionaire Its Academic has gotten off to a slow start this year for trainer Ron Burke but is an accomplished half-mile specialist having posted a 8-3-4-0 record going back three years. He most recently finished third on Sunday (Oct. 9) in the Allerage at The Red Mile.

Back Of The Neck earned his invite off a pair of powerful recent wins, first in the Maple Leaf Trot at Woodbine Mohawk Park and more recently in the Dayton Trotting Derby on Oct. 1. The five-year-old is trained by Ake Svanstedt, who will also start the U.S.-based Ecurie D for Denmark. The six-year-old has the fastest mile of the year, a 1:49.1 clocking, in North America.

While owned and mostly racing in the U.S., Lovedbythemasses races under the Canadian flag since he was bred at Windemere Farms on Prince Edward Island. The Jeff Cullipher trainee has posted seven wins in 16 starts this year.

The $1 million MGM Yonkers International Trot (Race 7) is contested at the distance of 1-1/4 miles and scheduled for 3 p.m. (EDT). It will be the first leg of a $20,000 Guaranteed Late Pick 4 (in conjunction with the USTA’s Strategic Wagering Program) and also includes the $250,000 Aria Pace and Robert Miecuna Trot Invitationals as Race 8 and 10.

Expected to compete in the Aria are Charlie May, American Courage and This Is The Plan as part of a strong 10-horse grouping. The Miecuna lured powerhouse female trotters Bella Bellini and When Dovescry to lead a 10-horse field.

A lunch buffet dining option is available on the second floor of the Empire Terrace at a cost of $80 per person on MGM Yonkers International Trot day. Tickets will be sold at the door but advance reservations can be made by calling 609-317-7295.

Following is the complete field for the International Trot along with expected drivers: