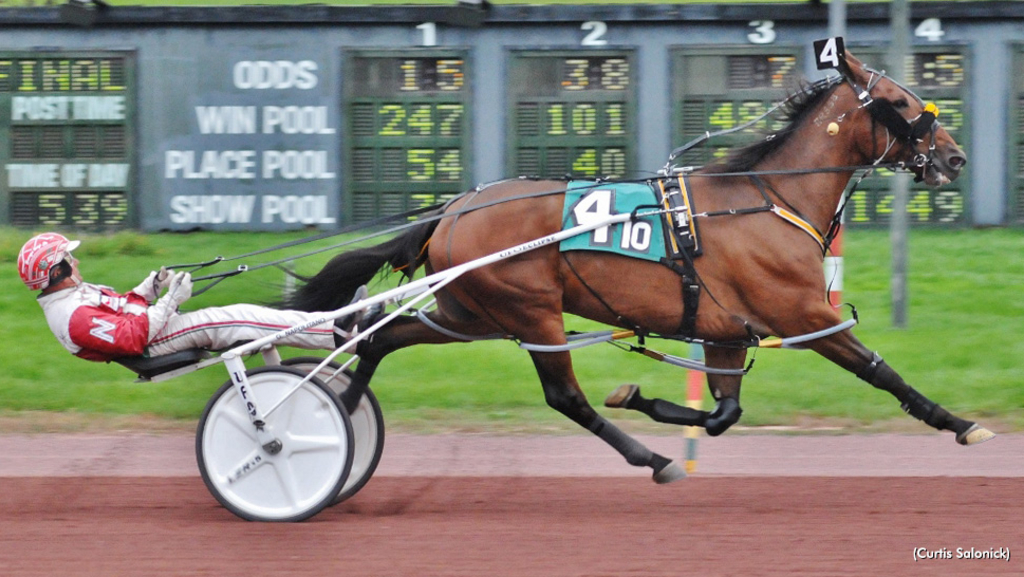 George Napolitano Jr. sent the Somebeachsomewhere gelding to the lead before the :27 quarter, then all but won the race by being able to back off the half to :56.2. The outer tier came up during the racing to the 1:24.2 three-quarters, but they never threatened, and Ruthless Hanover put in a :26.4 last quarter without heavy labour to be 2-3/4 lengths clear of first-over Carlisimo at the finish.

Since he put up the world-class fractions of :25, :51.4, and 1:19.1 on Sept. 4 before finishing second to Allywag Hanover in that one’s all-age track record-equaling mile of 1:47.3 at Philly, Ruthless Hanover beat the top-class horses at Philly and now at Pocono. The five-year-old has been in the free-for-all mix for seemingly a long time, yet his earnings went only to $309,673 for the brother tram of trainer Tom and owner John Cancelliere.

The skies opened as the horses warmed up for the $17,500 co-featured pace, but the Bettors Delight gelding Ilikemebettor A didn’t mind the ungracious reception in his U.S. debut, taking a North American mark of 1:50.2 (his lines showed him winning in a 1:49.4 rate in Australia in May, his previous start). Marcus Miller backed off a speed duel to sit third, sat in again when the outer tier formed, then when it melted away he swung his horse two and three-wide, and Ilikemebettor A finished sharply to defeat One Eight Hundred by 1-1/4 lengths. Erv Miller conditions the very promising pacer for his Erv Miller Stable Inc. and Doug Overhiser.