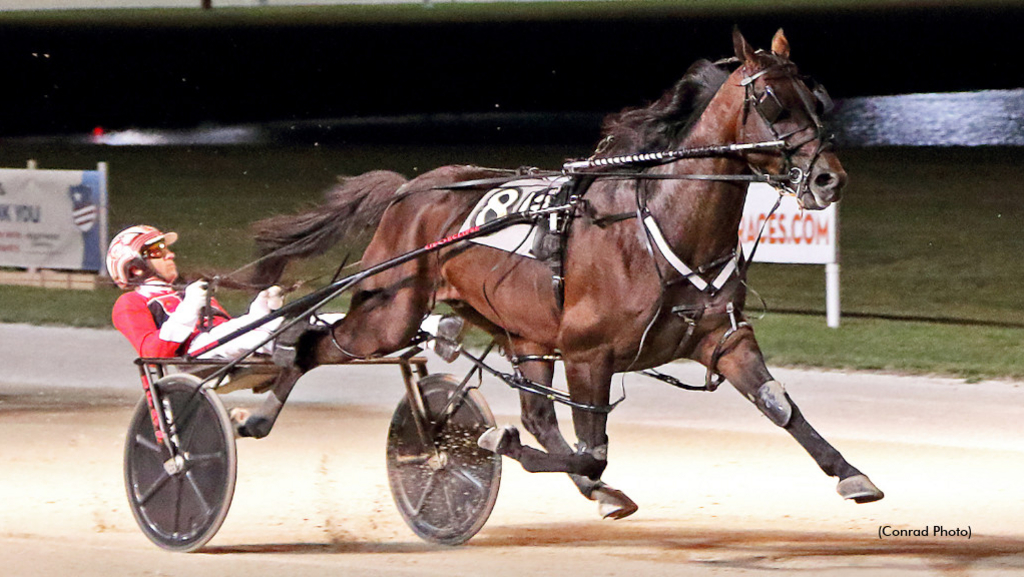 Bulldog Hanover rode second-over cover and had to come three-wide off the final turn to win the $250,000 Dayton Pacing Derby in 1:50.1 on Saturday, Oct. 1 at Dayton Raceway.

There was an early skirmish for the lead, with American Courage making the front through a quick first quarter of :26.2. Workin Ona Mystery was flushed out by Bulldog Hanover, coming to the half in :54.4.

Moving up the backstretch, the outer flow pressured the leader, and past the three-quarter pole, Bulldog Hanover tipped three-wide after being parked the mile and drew off to win easily in the stretch.

Test Of Faith was able to assert her dominance in the $250,000 Dayton Distaff Derby.

As the gate opened, Amazing Dream N and Gias Surreal battled through the first eighth, but Aaron Merriman was able to guide Gias Surreal to the lead at the quarter in :27.2. After a testing quarter, Yannick Gingras tipped outside and re-took the lead with Amazing Dream N heading to the three-eighths pole.

Heavy favourite Test Of Faith felt the leaders getting a breather and began her first-over bid. The 2021 Horse of the Year battled with leaders past three-quarters in 1:24.1. Amazing Dream N led the field into the stretch with Gingras urging her on, but Test Of Faith was confidently handled under a hand drive by David Miller to win in 1:51.2 for trainer Brett Pelling.

Atlanta led through most of the mile in the mares event, setting soft fractions on the lead. Bella Bellini made her move after a half in :57.1 and was the first foe to challenge Atlanta.

Atlanta led the field past three-quarters in 1:25.4, and as Gingras asked her to respond, he dealt with intense pressure from Bella Bellini on the outside. Through the stretch, When Dovescry, Atlanta and Bella Bellini threw down, but When Dovescry was able to turn the perfect trip into a victory, winning by three-quarters of a length in 1:54 for trainer Brett Pelling.

In the Dayton Trotting Derby, Jujubee got to the lead quickly when the gate sprung. As in the Dayton Oaks, McCarthy got a soft half, tripping the beam in :56.3.

Tim Tetrick sent Back Of The Neck to the outside at the half and dueled with Jujubee past three-quarters in 1:24.2. Back Of The Neck and Jujubee battled down the stretch, but Back Of The Neck was able to prevail by a half length in 1:53.1. Rattle My Cage finished a strong second after getting a perfect trip.

The five-year-old Ready Cash stallion is owned by Howard Taylor, Order By Stable and Judith Taylor.

(with files from the USTA)

Bulldog's next start will be next Sunday afternoon in The Allerage, at The Red Mile, in Kentucky. Keep your fingers crossed that it will be a warm, sunny day, because if it is, Bulldog might just break his own 1:45.4 world record.

Dexter, nice win mate. I watched it but I just can't believe it happened, oh my, really? 'I'llHaveAnother' Ontario needs racing, yes we're still here and if the world didn't know, they truly know now: we're still here. This truly amazing horse has given Ontario racing a huge confidence boost. Thank you very much to the connections of this horse and if there's a bus going to Lexington, I'll take a seat for $200.