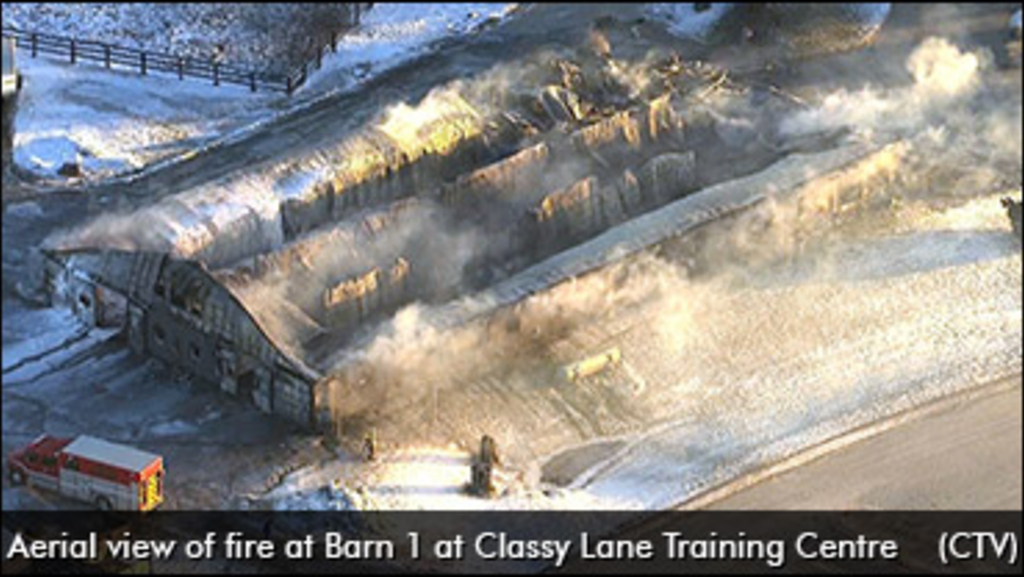 Trot Insider has learned that the full on-scene investigation into the tragic barn fire at Classy Lane Training Centre concluded on Thursday.

"They have concluded the investigation on scene, that's phase 1 of the investigation," Steven Goode, Fire Chief for the Township of Puslinch told Trot Insider on Thursday. "They've done evidence collection, forensics from the Ontario Fire Marshal's office was on scene, they've collected their information...they've x-rayed wires and looked at other potential sources of ignition."

Goode noted that the Fire Marshal's office has yet to confirm a cause or pinpoint a starting location for the fire, and the process is still ongoing.

"We're concentrating our efforts into one area -- potentially electrical. That's what we're really looking at here at this point: the electrical and some of the small appliances that existed there in one particular office area on the north-east corner of the building," stated Goode. "We've based it on witness accounts, and we've x-rayed the wires and based on x-raying the wires we can determine what had power and what didn't have power. So if the building had power and one section was burning, it would disconnect power to the other portion of the building. So the area of origin has pretty much been determined."

The next phase of the investigation still involves a number of agencies, including the Ontario Racing Commission, Technical Standards & Safety Authority, the Puslinch Fire Dept., the Ontario Fire Marshal's office and the Wellington County OPP.

"So jointly we concluded as far as the evidence goes," continued Goode. "We've sent one horse for testing at the University of Guelph for many reasons...first being fire-investigative and insurance-related."

According to Goode, the complete investigative report should be released in a couple of months. That report will be released to the owners of Classy Lane, with Goode indicating a possibility that all the information in the report may not be made public.

"In speaking with the lead at the Ontario Fire Marshal's office, they're suggesting it's going to take a couple of months to complete."

The Fire Services crew on site at Classy Lane on Thursday made a short speech to horsemen upon conclusion of this investigation phase.

"What we expressed was that it wasn't their fault by any means, we don't suspect anything suspicious and this was an accident...and accidents do happen. It's really sad, and we share that and hope they're able to rebound and we're sure that they will.

"By the time the first person recognized there was a fire, it was too late. The fire was well involved and there was really nothing that could be done, other than protect the adjacent property, the building and the animals as well."

Many of the firefighters from Puslinch that were on-call on Monday night were thankfully familiar with that barn at Classy Lane, having performed some large animal rescue in that exact location about three months ago.

"When we first got the call, and we knew the barn and the valuables within the barn -- the horses -- we summoned four other fire departments immediately. So we had 55 firefighters on scene with well over a dozen trucks. Not once did they run out of water and they had some big streams going on this building," stated Goode. "If it wasn't for that, there wouldn't be much of an investigation because we were able to salvage an awful lot within the actual structure, and able to protect the [propane] tanks that were right adjacent to it."

Details revealed the barn did not have a sprinkler system installed or some sort of smoke detection alert system. Goode is not convinced that a conventional system with traditional detection capabilities would have necessarily saved the day.

"We can't say that if sprinklers has existed or if there was an alarm detection system if that would have changed anything. Because it is a barn," said Goode. "If you talk to some of these operations at Woodbine and Mohawk, some of them do have it and they've had some devastating history relating to fire. In saying that, it comes with some issues...sprinklers freezing up, horses hitting sprinklers, the alarms going off and scaring the horses and causing a lot of harm.

"So a traditional system, to me, will not work. It would have to be a system that we would build and revise to accommodate such a business."

Goode stated that the Fire Dept. will return to the training centre in a few weeks to work with those stabled at Classy Lane and provide additional grief support if needed. His team will also be working with Classy Lane and its horsemen to develop an action plan promoting proper emergency response and avoiding potential hazards.

"If you can't act appropriately on scene -- and I'm not saying they didn't, because I believe they did -- the actions of those that first witness a fire are the ones that are going to determine the outcome of the situation. And that's the case with any fire."