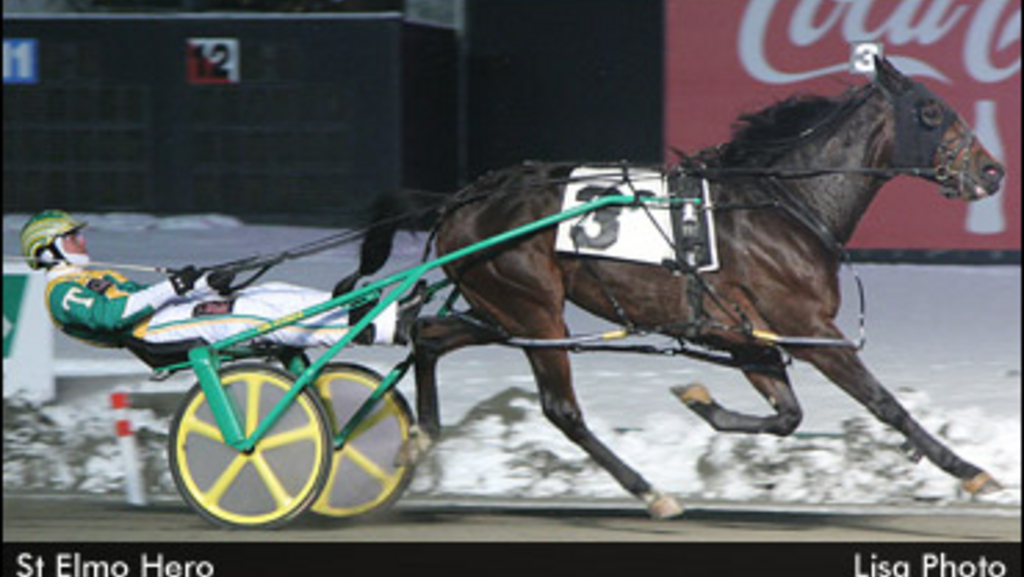 With Tim Tetrick at the lines, St Elmo Hero led from gate-to-wire as he extended his streak to 20 wins in the second race, a $20,000 prep race for the Complex Series. He was clocked in 1:50.4. The son of Western Hero-Crystal Crickett has been perfect since winning his career debut on July 14, 2010 at Balmoral Park. Illinois owner John Barnard claimed the unraced four-year-old gelding out of that start for $8,000 and he has since won $145,000. Charles Eustis III trains St Elmo Hero.

"He is so easy to get along with," Eustis said. "Whatever you ask him to do, he just does it. You can drive him with two fingers. When he sees another horse, that's when he wants to go."

St Elmo Hero has won all but two of his races on the front end, but Eustis is confident the gelding will be able to handle racing from off the pace at the Meadowlands.

"He has 20 wins and only two races has he come from behind," he noted. "In one of them, he came from dead last. He relaxes when he is on top and controls things, but he can race from behind if he needs to."

Eustis is most proud of St Elmo Hero's victory in the Blue Route Final on December 20, 2010 at Chester, in which he held off Meirs Hanover for a career best 1:50.1 clocking.

"Meirs Hanovers is a really nice horse and he fought him down to the wire," he said. "The margin was only a neck, but that was his best win so far and his record, too."

Eustis admits he feels pressure to keep the streak alive when the three-week Complex Series begins next Saturday at the Meadowlands. 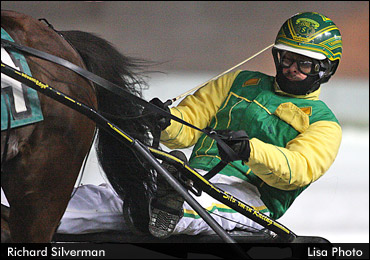 "I know he may get beat at some point," he said, "Most good horses do, but the big thing with him is just to keep him healthy and sound."

Driver Richie Silverman returned to the sulky for the first time Saturday night at the Meadowlands since fracturing both of his ankles in a racing accident on June 18, 2010.

"I feel good," Silverman said after driving Urgent Action, a horse trained by his father, Jerry, to a fourth-place finish in the second race. "Physically, I'm feeling about 80 per cent. I felt comfortable out there on the track, but it is going to take a couple of drives to get back into a groove. I'm feeling good, now I just need some [horse] power!"

The most severely injured of the six drivers involved in the spill last June, Silverman was slated to drive three horses on the card, including Smellthecolornine in the $32,000 Invitational Pace.

Vlos overcame an outside Post 10 start as he took control of the Invitational pacers down the backstretch and held off 6-5 favourite Bettors Sweet to win the feature event in 1:50.2.

Dragon Island (David Miller) crossed over from Post 9 to take the early lead ahead of Smellthecolornine and post a :27.3 first quarter before Brian Sears sent Vlos to the top from third. The seven-year-old son of Dragon Again-Sweet Tender reached the half in :55.1 and three-quarters in 1:23.2 with Bettor Sweet (John Campbell) applying pressure. Vlos fought gamely down the stretch to fend off Bettor Sweet for the one-length victory. River Shark (Daniel Dube) closed well from the backfield for third over Smellthecolornine.