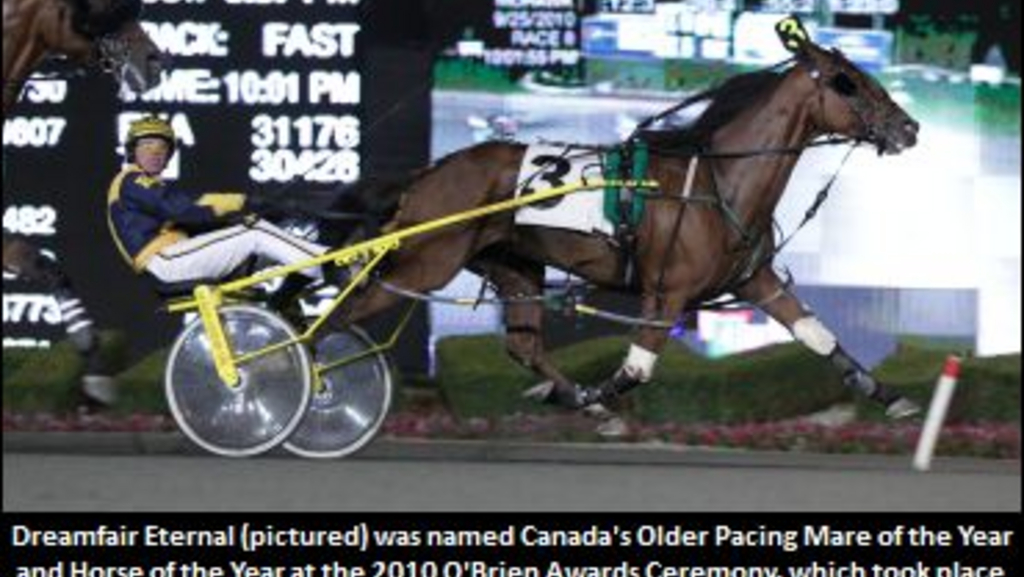 On Saturday, January 29, Standardbred Canada hosted the 2010 O’Brien Awards to honour and recognize the horses and people that have made the greatest contribution to Canadian harness racing

over the past season. The awards are named for the late Hall of Famer Joe O'Brien, a member of the Canadian Horse Racing Hall of Fame.

For the fourth time in the history of the O’Brien Awards, Casie Coleman, 30, of Cambridge, ON, was voted Canada’s Trainer of the Year. Her 2010 season proved to be another outstanding campaign, as the B.C. native trained the winners of 187 races. Performers from her stable earned more than $6.6 million in purses during the 2010 campaign. Two of Coleman’s fillies, Idyllic and Western Silk, took home divisional honours. Idyllic, a winner of over $805,000 and 8 of 9 races, including the Three Diamonds, was voted Canada’s Two-Year-Old Pacing Filly of the Year. Jugette winner Western Silk won an O’Brien as Canada’s top three-year old- pacing filly following a season which saw her win 11 of 15 races, $1.1 million in purses and numerous stakes, including the Fan Hanover Stakes, SBOA Stakes and six Ontario Sires Stakes events.

Randy Waples, 45, of Milton, ON, took home his third O’Brien trophy as Canada’s Driver of the Year following one of his best seasons. Waples was the regular driver for three O’Brien Award winners: Dreamfair Eternal (Horse of the Year, Older Pacing Mare of the Year), San Pail (Older Trotting Horse of the Year) and Text Me, (Three-Year-Old Trotting Colt of the Year). Waples drove the winners of 329 races last year – a season in which his mounts earned more than $8 million in purses. 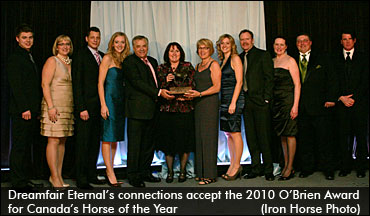 Pacing mare Dreamfair Eternal, bred by John and Mary Lamers of Ingersoll, ON and owned by John Lamers, was awarded the Horse of the Year trophy along with an O’Brien as Canada’s Older Pacing Mare of the Year. The 2010 season was an incredible one for the daughter of Camluck who won 16 of 22 starts and over $942,000 in purses. She racked up wins in the final of the Masters Series, an elimination of the Roses Are Red Stakes, elimination and final of the Milton Stakes, the elimination and final of the Forest City Pace, and her division of the prestigious Breeders Crown.

The two-year-old pacing colt title went to Big Jim, owned by James Carr of Hamilton, ON. The colt won six of 10 races and over $834,000, including wins in the final of the Dream Maker Pacing Series, a division of the Nassagaweya Stakes, an elimination of the Metro Pace, a division of the Champlain Stakes, his division of the Breeders Crown, and he finished off his season at the top of his game with a 1:49.1 World Record in the Governor’s Cup at Woodbine.

Rock N Roll Heaven was voted Three-Year-Old Pacing Colt of the Year following a stellar sophomore campaign which included 16 victories and over $2.1 million in purse earnings. From Aug. 22 through Nov. 28, he reeled off a 10- race win streak during which he recorded victories in the Little Brown Jug, the Breeders Crown, Tattersalls, Messenger and Matron in the process.

Won The West, winner of the Canadian Pacing Derby, Canada’s oldest harness stakes event, was voted Canada’s Older Pacing Horse of the Year. The now seven-year-old son of Western Hanover hit for 18 of 19 top three finishes last year for $1.3 million in purse earnings. He swept the Molson Pace at Western Fair Raceway and also scored a victory in his division of the Breeders Crown.

Crys Dream, Canada’s Two-Year-Old Trotting Filly of the Year, bred and co-owned by Reve Avec Moi Dreamwithme, of Knowlton, QC, was almost perfect in her juvenile campaign in which she won seven of eight races. She banked almost $600,000 in earnings and recorded victories in the Peaceful Way Stakes, Goldsmith Maid and her division of the Champlain Stakes.

The trophy for Two-Year-Old Trotting Colt of the Year went to Blue Porsche, owned by Robert Burgess and Karin Olsson Burgess of Campbellville, ON. The son of Glidemaster, trained by Blair Burgess of Campbellville, ON, won five races, over $405,000 and posted victories in divisions of the Champlain and Bluegrass Stakes before capping his season off with a win in the Valley Victory at Woodbine.

The hardware for Three-Year-Old Trotting Filly of the Year went to the Riina Rekila-trained Random Destiny, who won $490,000 in purses and six races, including the SBOA Stakes and her season-ending division of the Ontario Sires Stakes Super Finals.

Text Me picked up his second consecutive O’Brien trophy, this time as the country’s top three-year-old trotting colt. In 2010, the son of Kadabra dominated his competition in Ontario Sires Stakes action, as he won six events, including his season-ending OSS Super Final to give him $554,727 in seasonal purse earnings and nine wins.

Windsong Soprano, Canada’s Older Trotting Mare of the Year, won four races and netted $263,485 in purses during the season and was runner up in a number of major stakes engagements, including the Armbro Flight and the Conway Hall.

Millionaire San Pail, winner of his second Maple Leaf Trot title with season’s earnings of over $656,000, won the Older Trotting Horse category for the second consecutive year for owner-breeder Glenn Van Camp of Port Perry, ON and trainer-owner Rod Hughes of Dunsford, ON. His crowning moment came in Canada’s most prestigious race for older trotters, the Maple Leaf Trot on July 25 at Mohawk, where he conquered the sport’s best in front of a capacity crowd. He won 13 of his 15 races during the season and missed finishing on the board on just one occasion.

The Armstrong Breeder of the Year Award went to Robert McIntosh Stables Inc., of Windsor, ON, marking the second time McIntosh Stables have been honoured with this award. Some of the 2010 star performers bred by McIntosh Stables which contributed to its 281 wins and $3.5 million in purse earnings included Text Me, Strike An Attitude, Stonebridge On Ice, Day To Ponder and Good Bad Lucky.

The O’Brien Award of Horsemanship went to Rick Zeron of Oakville, ON. Zeron has been posting solid training and driving numbers for over two decades. He posted some of his highest statistics ever in the 2010 season on the tough Woodbine Entertainment Group circuit. As a driver he made 257 trips to the winner’s circle and drove horses to $5.7 million in earnings. On the training side, he had 95 wins and $1.7 million in earnings to his credit.

Winners in Standardbred Canada’s Media Excellence Awards categories were Andrew Cohen for Outstanding Written Work for his ‘The Brooks Brothers’ article, Woodbine Entertainment Group for Outstanding Broadcast for its production of the 2010 North America Cup, and Ann MacNeill for her photograph of Part Shark in the Gold Cup and Saucer in Outstanding Photography.

Admirals Express, affectionately known as ‘The Grey Gladiator’ was voted the 2010 Cam Fella Award winner, and his owners, Ed and Cheryl Sayfie and Laurel and Gary Gust, were presented with the Cam Fella Award. ‘The Admiral’ received the award for his extreme meritorious service to the Canadian harness racing industry in recent years.

On Tuesday, February 1, Standardbred Canada will release the complete vote tallies for each category.

A complete list of winners and their connections follows.

HORSE OF THE YEAR

Ian Dow Congrats to all the

Ian Dow
Congrats to all the winners,
Gregg McNair didn't even get a sniff, go figure!

I take nothing away from

I take nothing away from Rick Zeron, congratulations on your horsemanship award. I DO have to ask though. What are the guidelines for getting nominated.? Gregg Mc Nair has won several BIG races, races at every track from A to Z surface and holds charity events for causes in his area and NOT even a nod.? He gives charity to the Police Force and the Hospital on behalf of his ball tournaments and I just can't imagine a better horseman who is more deserving of his "horsemanship". I could go on and on about all he has done but Gregg being "himself" would not want me too. Agree or disagree, the choice is yours, but I hope the O'Brien awards commitee takes notice next year and "embarrasses" Gregg by nominating him for the award.

I thought everyone did an

I thought everyone did an outstanding job in this yrs Obrien awards. I had a blast even though western silk was declared the winner of the 3 yr old filly division. WE all know that fight is not over .Randy Waples was at my table and that assured a fun nite.

EXCELLENT all around. CONGRATULATIONS to all the winners and I was rooting for Dreamfair Eternal for Horse of the year!!!