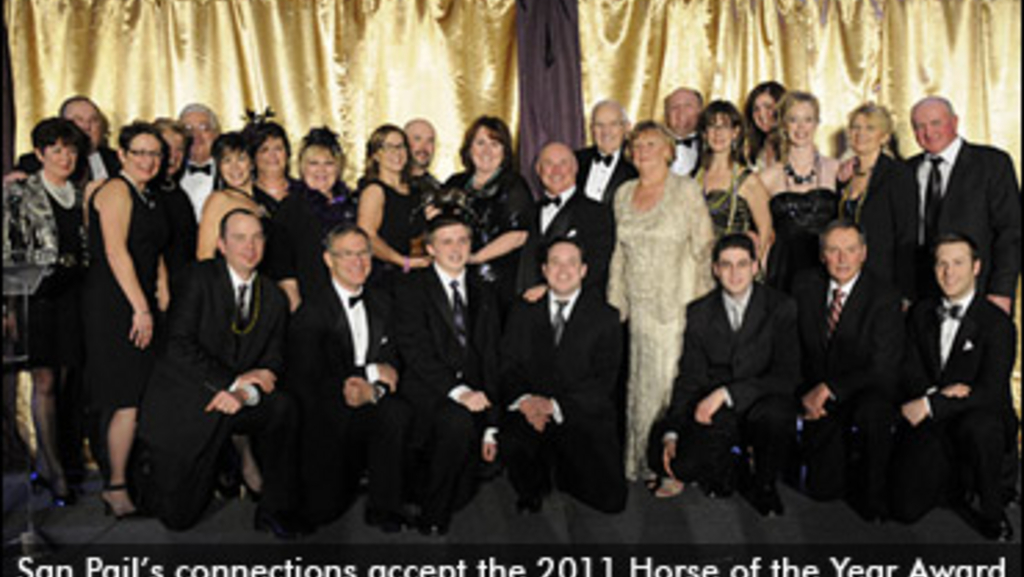 . The awards are named for the late Hall of Famer Joe O'Brien, a member of the Canadian Horse Racing Hall of Fame.

Superstar trotter San Pail was honoured as Horse of the Year and was also the Older Trotting Horse of the Year for the third consecutive year. Jody Jamieson won his third title as Canada’s Driver of the Year, following a sensational season in which he captured the World Driving Championship Title, while Jeff Gillis took home his first O’Brien in the Trainer of the Year category. Alberta’s Keith Clark took home the O’Brien Award for Horsemanship for the second time in his career.

San Pail was the unanimous choice as Canada’s Older Trotting Horse. The son of San Pellegrino, out of the Balanced Image mare Village Beauty, dominated Canadian harness racing last season. The fan favourite topped the charts for older trotting horses in North America with over $1.2 million in earnings and 14 wins in 16 races, highlighted by victories in every stakes event he competed in. He scored eleven of his wins and earned $934,920 in Canada, between Mohawk and Woodbine racetracks. His stakes wins included the elimination and final of the Glorys Comet, the Maple Leaf Trot, the Nat Ray, the Credit Winner, and the Allerage Farm Trot. His final moment of glory for 2011 came in the $602,340 Breeders Crown Open Trot at Woodbine on October 29. In this season- ending Championship, he took on a world class field, which included two European trotting stars, and trotted to an exciting and hard fought 1:51.4 neck victory.

Jody Jamieson, 35, of Moffat, ON, was voted Canada’s driver of the year following an exceptional season. Jamieson put together some career best numbers in 2011, leading all Canadian harness drivers with over $11.6 million in purse earnings. He made 468 trips to the winner’s circle, captured his second North America Cup and secured his second World Driving Championship title this season. Jamieson was the regular driver for four O’Brien winners: older trotting mare Frenchfrysnvinegar, three-year-old pacing filly Monkey On My Wheel, three-year-old pacing colt Up The Credit and two-year-old pacing colt Warrawee Needy.

Keith Clark, winner of the O’Brien Award of Horsemanship annually posts solid training and driving numbers. The 2011 season marked the sixth consecutive year that the Hall of Famer surpassed the $1 million mark in earnings as a trainer, while sending out 177 winners from his barn. On the driving side, he hit for 167 wins and eclipsed the $1 million marker for the seventh straight season. Clark was the leading trainer at three racetracks last year – Alberta Downs in Lacombe, AB, Northlands Park in Edmonton, AB and Fraser Downs in Surrey, BC. His driving talents are equally as impressive as he was also the leading driver at Alberta Downs in 2011.

American Jewel was honoured as the Two-Year-Old Pacing Filly of the Year. The daughter of American Ideal won eight of nine races and over $669,000. Three of her wins were on Canadian soil including a season’s best effort of 1:50.2 at Mohawk when she won the Shes A Great Lady Stake in World Record time.

The two-year-old pacing colt title went to Warrawee Needy, a winner of nine of 12 races and $535,000 during his juvenile campaign. The E Dees Cam colt put together a six- race win streak druing June and July. He won seven Ontario Sires Stakes events including the OSS Super Final where he trounced his competition, cruising to a nine and three-quarter length victory.

Up The Credit was voted Three-Year-Old Pacing Colt of the Year following a stellar sophomore campaign which included eight victories and $1,118,953 in earnings. He scored his richest payday in the $1.5 million North America Cup, and also captured the Somebeachsomewhere in a career best 1:49, as well as a division of the Simcoe and The Diplomat Final.

Monkey On My Wheel won the O’Brien as Canada’s Three-Year-Old Filly Pacer of the Year. The daughter of Mach Three won seven races and over $816,000 last season. Her portfolio included three Ontario Sires Stakes wins and wins in the elimination and final of the Canadian Breeders Championship. On October 29, she scored her richest payday in winning the Breeders Crown Championship where she also turned in a career best 1:49.3 performance.

North America’s leading money making older pacing mare, Anndrovette took home the O’Brien in her division. Her 2011 season was highlighted by $747,338 in purse money and 11 victories which included the Betsy Ross, the Artiscape, the A Spring of Hope, an elimination of the Milton and elimination and final of the Breeders Crown.

Triple millionaire Foiled Again was voted Older Pacing Horse of the Year. He hit the board for 25 top-three finishes in 28 races and netted $1,400,937 this past season to top the charts in earnings for his division. He captured numerous stakes events on both sides of the border including the Molson Pace at The Raceway at Western Fair and an elimination of the Canadian Pacing Derby at Mohawk Racetrack.

U.S.-based Check Me Out took the O’Brien trophy in the two-year-old trotting filly category. Check Me Out was North America’s leading money winning filly with $898,343 in earnings collected from 14 wins and two seconds. Her impressive resume boasted wins in the Reynolds, Tompkins, Merrie Annabelle, Pennsylvania Sire Stakes, Champlain, Breeders Crown and Matron.

China Pearls took home the hardware for Three-Year-Old Trotting Filly of the Year. The sophomore filly posted eight wins and took home $511,905 in purse money in 2011. Highlights of her season were wins in the elimination and final of the Canadian Breeders Championship, the SBOA and the Ontario Sires Stakes Super Final.

Daylon Magician was voted Canada’s top three-year-old trotting colt. The ultra consistent son of Kadabra won 11 of 17 races and $1,068,813. He topped the earnings charts and picked up seven wins in Ontario Sires Stakes action. He scored a career best 1:52.3 effort in the Canadian Breeders Championship which kicked off a seven race win streak and included wins in the elimination and final of the $1million Canadian Trotting Classic.

Frenchfrysnvinegar, Canada’s Older Trotting Mare of the Year, was a regular campaigner in Woodbine Entertainment circuit’s preferred mare ranks. Winning eight races and $351,825, she capped a productive season with a stirring victory in the Breeders Crown Championship despite starting from post position 10.

The Armstrong Breeder of the Year Award went to Warrawee Farm of Rockwood, ON. Warrawee Farm had 31 starters who won 101 races and $2.4 million last season. Mystician, O’Brien Award winner Warrawee Needy and Mister Herbie were all $100,000 + performers bred by Warrawee Farm.
Winners in Standardbred Canada’s Media Excellence Awards categories were Lauren Lee for Outstanding Written Work for her “All Hail The Pail” article, Woodbine Entertainment Group for Outstanding Broadcast for its production of the 2011 Metro Pace and Canadian Pacing Derby, and Claus Andersen for his photo from a race bike at The Raceway at Western Fari District.

On Tuesday, January 31 Standardbred Canada will release the complete vote tallies for each category.

A complete list of winners and their connections follows.

Owned by Carl Jamieson, Princeton, ON, Thomas Kyron, Toronto, ON, Dr. Michael Wilson, Rockwood, ON and Floyd Marshall, Jarvis, ON

Monkey On My Wheel

Owned by Mac Nichol, Burlington, ON & Travis Umphrey, Guelph, ON

Owned by David Smith, Rockwood, ON

Owned by Glenn Van Camp, Port Perry, ON and Rodney Hughes, Dunsford, ON

HORSE OF THE YEAR – San Pail

In my opinion, HONOURS also

In my opinion, HONOURS also go to our up and coming drivers Scott Zeron, Douglas McNair,Jonathan Drury,Bob McLure,and all the other young drivers who have devoted there time to driving horses for a living.GO FOR THE GOLD BOYS!