The Cowgirl And Bugsy 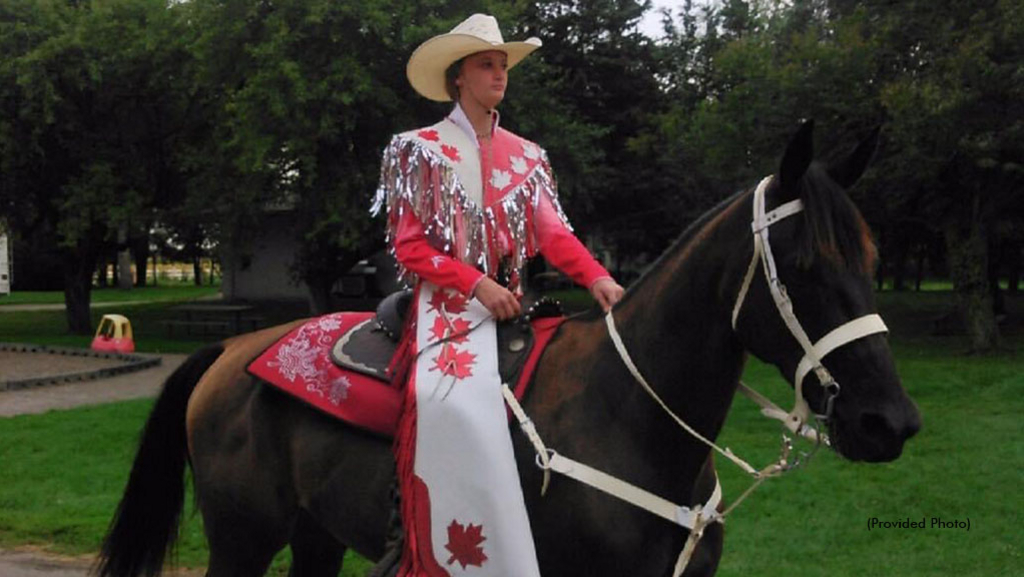 It is, among many things, a look of mutual reassurance whenever the young rider and the imposing former Standardbred lock eyes in the crowded arena.

Festooned in eye-catching red and white, holding a Canadian flag aloft, 15-year-old Jamie Drew will take a deep breath before the music starts and the pageantry begins.

Sitting astride 'Bugsy,' a powerfully built trotter who had a brief four-race career on the racetrack, the teenager from Tilbury, Ont. looks for a confidence boost ahead of the big moment.

She never has to look far.

“He’s a pleaser and he wants to do anything for you,” shared Drew. “He has some anxiety and it takes a blend of me encouraging him and having him trust me for him to know that I am here for him.”

Drew, who has been part of the Canadian Cowgirls Precision Team since 2018, was joined by Bugsy starting 18 months ago. Performing in front of audiences across North America with their precision riding, sparkling costumes and breathtaking maneuvers, the Canadian Cowgirls, hailing from the municipality of Chatham-Kent, Ont., currently features 14 women and their horses, a mix of different equine breeds including Quarter Horse, Appaloosa, Arabian and Paint. Over the years, the group has earned numerous accolades, including “Best Horse Entry” and “Best Formal Coloured Guard Entry” at the Calgary Stampede Parade, and “Best Equestrian Entry” at the Indy 500 Parade in Indianapolis.

Known as Masseno during his racing days, Bugsy has become somewhat of a rockstar on the circuit. Not only for his size, but also for his back story.

“There were a lot of people interested in him because of how big he is and his conformation," said Drew. "He’s a humungous horse. He’s the youngest on the team, but he’s also the tallest. I’ve had people ask me if he’s a mustang. When they find out he’s a Standardbred, they ask all kinds of questions. Once people hear he’s only six [years old], they are so impressed at how well he’s done for such a young horse.”

The trotter, who posted a pair of seconds and a third from his four starts, was adopted from the Ontario Standardbred Adoption Society (OSAS) by Drew and her family in early 2021.

Established in 1996 to assist in the adoption and relocation of retired and non-racing Standardbred horses within Ontario, OSAS is operated by a Board of Directors and is funded through fundraising, contributions from racetracks, horse industry organizations and private donations. Its program, which follows-up on each horse after an adoption, helps educate and assist in the retraining and management of the horses.

“We have a good friend, Larry Gibbons, who used to race Standardbreds, and I was looking for a project-type horse for the summertime,” recalled Drew. “It was love at first sight. He was at a foster home for a month and I would get photos and updates of him from Bert and Sue Mollica. They thought it would be a good match, Bugsy and me, for what I was looking for. I liked him as soon as I saw him.”

The pair has been inseparable since Bugsy -- who was trained and bred by Julie Walker and her father Paul -- came to the Drews in December 2020.

Drew recently welcomed a second project horse into the mix.

Her work with Bugsy will act as the basis for the development of his new stablemate.

“He’s put a lot of confidence into me, making me realize what I am capable of," said Drew. "I’m very grateful for what OSAS does. I like how they help find the horses the right home and the right person. That’s what they did for me and Bugsy. He has helped me learn a lot, which is a big help in what I can teach the new horse. He’s taught me patience and given me the interest in wanting to train horses now.”

That newfound confidence was on display this July in Kentucky at an event the Canadian Cowgirls Precision Team participated in.

Drew was, admittedly, battling nerves in the days and weeks leading up to the trip to the Bluegrass State.

In the moments prior to entering the arena, those feelings of trepidation heightened.

After a quick glance down, the apprehension and anxiety seemed to melt away.

“It was his first time and my first time going to the States together. It was huge. He did really, really well. It’s a big confidence thing for him to have all the other horses around him. It was also nerve-wracking for me because it was such a big venue and a place I had never been to before. But we were there for one another and that made everything calm. It was overwhelming at first, in knowing how much I had put in and all the work he had put in, but we did it.”

For Mark Drew, seeing his daughter and her equine teammate perform at high-profile events is an unabashed source of pride.

He often marvels at how far the two have come in such a short period of time.

“There are many venues, big or small, that they participate in," he said. "They come out as a huge team of riders and horses into a crowded indoor or outdoor arena. The crowd goes completely bonkers. To see the team in unison, it really is quite amazing. It really is electrifying. When you are there in person and the music starts playing… it’s a sight to see. The part that sticks out for Jamie and Bugsy is that they’ve worked so hard in eight months to perform at an elite level. He trusts her to guide him and she trusts him. It’s great to see the confidence he has in her and vice-versa.”

A bond that continues to grow with each passing day.

“I feel so lucky to have Bugsy in my life,” said Jamie Drew. “I know we’ll always be there for each other.”