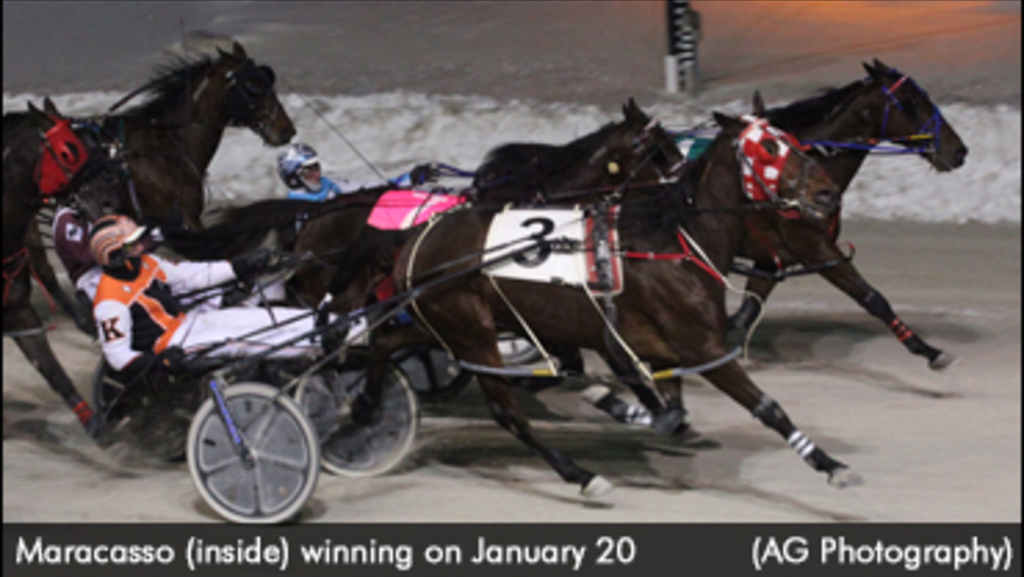 Maracasso prevailed by a nose in the $11,500 Preferred 2 Handicap Pace on Monday (Jan. 20) following a delay to the evening's feature (Race 10) caused by a reported power surge that forced a reboot of the track lighting at The Raceway at Western Fair District.

Driven by Travis Henry, Maracasso established the lead over 6-5 favourite Pro Beach through a :27.1 quarter with Levis Day following back in third. Avatar J launched a first-up attack at the :56.4 half-mile mark and headed the front-runner by the next marker in 1:25.4 with Mr Mach Jimmy gapping his on cover. However, Maracasso fought back down the stretch to score in 1:56.2 while Mr Mach Jimmy closed three-wide into the win photo.

Maracasso held on to record his 23rd career victory, a nose in front of Mr Mach Jimmy with Avatar J finishing third in between. Sent postward at odds of 6-1, the eight-year-old gelded son of Lis Mara paid $14.10 to win.

Now boasting a six-figure bankroll, Maracasso has won his last two appearances at The Raceway out of three starts in the care of Frederick Bourgault, who trains for Ecurie Alpha of Metabetchouan, Que.

Favourite Bettors Western ($6.40) led all the way in the $9,400 Preferred 3 Pace earlier on the card, going the added distance of 1-1/16 miles in 2:05. The six-year-old Bettors Delight gelding won by three lengths over Supersport and Bit Of Luck with Brett MacDonald in the race bike for his father Ron, who trains for Synerco Ventures Inc.