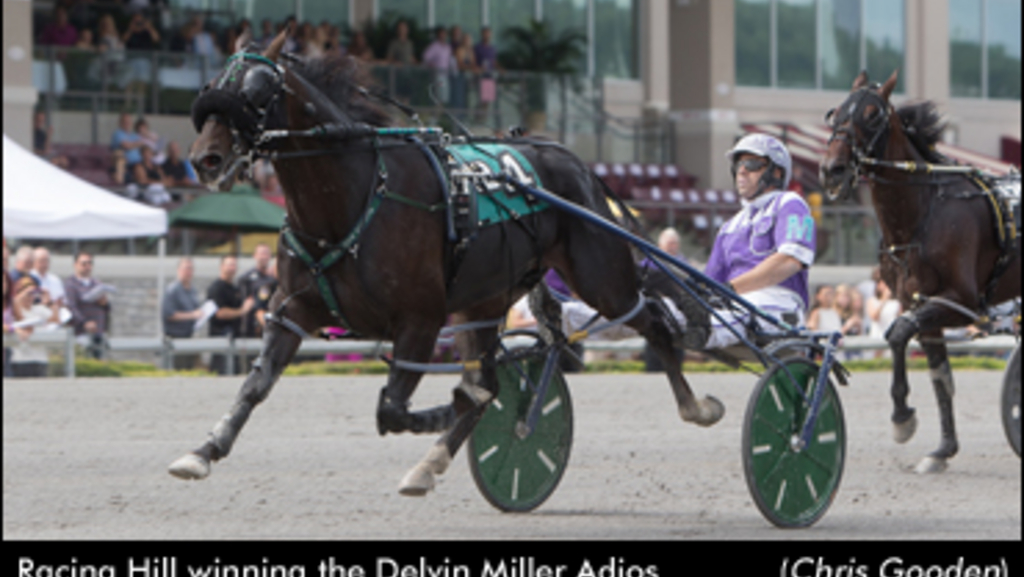 Looped from the gate and forced into brutal fractions of :25.2 and :52.1 — in the slop, no less — Racing Hill showed his talent and heart when he drew away from the field late and captured Saturday’s $400,000 final of the Delvin Miller Adios Pace for the Orchids at The Meadows in a career-best 1:48.4.

The pocket-sitting Check Six could not improve his position in the lane and finished second, two and a quarter lengths back, while Fernando Hanover was a ground-saving third.

Racing Hill entered the 50th edition of the Adios with the flashiest credentials, including his victory in the $500,000 Hempt Memorial final and second-place finishes in the finals of the North America Cup and the Meadowlands Pace — each a $1 million event. But if his rivals didn’t appear up to the task of beating Racing Hill, it seemed that weather and trip might do him in.

Rain punctuated by storms — the skies cleared shortly before the Adios went off — created a surface that proved tiring to some early leaders throughout the card. And Racing Hill, the 2-5 favourite, couldn’t wrest the lead from Check Six until just before the three-eighths.

“The race was not going the way I wanted it to go,” said winning driver Brett Miller. “I was expecting a few more people to leave and kind of shooting for the three-hole. When that didn’t happen, I said to myself, we’re in trouble.”

Miller had an even stronger reaction when he realized how fast Racing Hill was going.

“When I saw the time flash up,” he said, “I wanted to throw up. I didn’t think there was any way he could keep going. He goes to the half in :52.1 and keeps going. Horses don’t do that.”

Once he thwarted the first-over challenge of longshot Another Daily Copy, the son of Roll With Joe-Chasing Ideals opened up and had only the timer to beat. The win pushed his career bankroll over the million-dollar mark.

Tony Alagna, who trains Racing Hill for owner/breeder Tom Hill of Hamilton, Ont., said he expected a swift opening half if only because his colt was facing five foes from the powerful Ron Burke stable.

“I didn’t think they would let us get to the half in :55,” Alagna said. “I knew they would make us earn it.

“I’m a big believer in watching drivers’ body language. I was watching Brett in the bike, and he was telling me that he felt he had something left.”

Alagna said he plans to give Racing Hill two weeks off before his next engagement, the Battle of the Brandywine.

Manhattan Beach took fourth and More Dragon fifth, meaning that Burke, who entered six horses in Adios 50 and saw five advance to the final, finished 2-3-4-5. Did he find that frustrating or satisfying?

ADIOS NOTES: Miller entered Adios 50 as the leading money-winner in the history of the event among drivers who had never won an Adios final. With the victory, he vaulted to eighth on the all-time Adios earnings list with $562,286... Although the track was sloppy, Racing Hill matched the time of last year’s winner, Dudes The Man. They’re tied for the fourth-fastest Adios final... James Witherite, race caller at Tioga Downs and an accomplished jazz organist, showed off another dimension of his talent, entertaining fans as the Adios Day bugler. He included some subtle touches, such as playing the old Billy Joel hit “She’s Always a Woman” to introduce the Adioo Volo — a stake for three-year-old fillies.

Newborn Sassy opened a sizable lead, but needed to find another gear late to preserve her victory in Saturday’s $110,950 Quinton Patterson Adioo Volo for three-year-old filly pacers at The Meadows. The Grand Circuit stake was the sub-feature on the card headlined by the $400,000 final of the Delvin Miller Adios Pace for the Orchids.

With victories in a Lynch elimination and a Pennsylvania Sires Stakes leg on her resume, Newborn Sassy was the most accomplished in the field of seven and was hammered down to 1-2 in the wagering. She drew off to a one and a half-length lead at the top of the stretch and figured to jog home the winner.

But the sloppy track proved tiring for the daughter of Western Ideal-Sass Newton, and Tim Tetrick had to remind her emphatically that her work was not done. She responded to his urging and held off Shezarealdeal by a neck in 1:51.1, with Heels On The Beach third.

“She’s a winner,” he said. “There’s no doubt she’s a winner. She loves what she does. She was just here last week. When I took her off the trailer this week, she was like, ‘are you sure we want to do this again?’ She’s a fighter. If you don’t give up, she won’t.”

Jo Ann Looney-King and CC Racing own Newborn Sassy, who soared over $400,000 in lifetime earnings. The filly will be pointed to the next PASS leg.

Glidinthruparadise lost her duel for the early lead and had to slink back to third, a disappointment that would frustrate many young trotters. But the daughter of Yankee Glide-Chowda wasn’t discouraged at all, moving first over to put away the leader, Hot Curry, and score for Brian Zendt in a career-best 1:55, matching the stake record of Upfrontluckycarol.

“She’s a little headstrong leaving the gate, and she was going forward no matter what,” Zendt reported. “I didn’t want to sit third, but they were going enough that she had more trot than any of them late.”

Ameliosi finished second, one and three-quarter lengths back, while Moots completed the ticket. Lisa Dunn trains Glidinthruparadise, who was won six of her 11 starts this year, and owns with Leslie Dunn Zendt.

The fastest two-year-old of 2016, Fear The Dragon, again put in a huge mile, overcoming both the sloppy surface and a determined late bid by Donttellmeagain to win in 1:52.4.

The son of Dragon Again, trained by Brian Brown for the Emerald Highlands Farm, went a mile that might have been as impressive as the 1:50.3 mile he went here on July 20 to make him the fastest freshman so far, regardless of track size. Hall of Famer David Miller whooshed the precocious baby to the lead from fourth coming on the first turn, with Donttellmeagain, undefeated in three previous starts, relinquishing the lead going into turn two. From there, it was basically a two-horse contest, and Donttellmeagain did himself great credit by cutting into the leader’s margin steadily. In the end, Fear The Dragon held his tough rival off by a neck with a :27.4 kicker. Cinnabar Dragon finished third.

The very next race on the card was another division of the Lawrence, and fans could be forgiven at headstretch if they thought they were watching a replay: the first race went in splits of :27.4, :56.1 and 1:25.1 with the pocket horse second choice moving out to challenge the favourite, while the second division featured fractions of :27.3, :56.1, and 1:25.1 with the second choice two-holer moving to challenge.

The difference was that Every Way Out, the pocket horse, proved the better late over front-stepping Normandy Beach, gaining into a :27.2 last quarter to win by a length in 1:52.3 to tie his mark. Southwind Yukon completed the ticket.

The son of If I Can Dream is a New Jersey Sire Stakes champion and undefeated in four starts for driver Tim Tetrick, trainer Dylan Davis and owners Howard Taylor, Abraham Basen, Ed Gold and Thomas Lazzaro.

Tetrick indicated he had little to lose by vacating the pocket early.

“I wanted to give my horse a chance,” he said. “From the middle of the turn on, he’s supposed to be able to pace with that horse. I thought I would win or be second either way. For a two-year-old, he’s pretty seasoned — and he’ll get better, too.”

When 1-5 favourite Downbytheseaside broke his overcheck going to the gate and caused a recall, it may have been an omen that it wouldn’t be his day. Indeed, after being sixth by eight and a half lengths just before the last half of :55.1, he could only rally for third, as second-choice Filibuster Hanover came out of the pocket in the :27 last quarter to catch front-stepping Bettors Western by a head. The time of 1:52, the fastest divisional clocking and only two ticks off the stake record, was also a personal-best for the Somebeachsomewhere colt. Yannick Gingras drove for trainer Ron Burke and the ownership of Burke Racing Stable LLC, JT45, Joseph DiScala Jr., and Weaver Bruscemi LLC.

The first three divisions produced a favourite and two second choices as winners, but in the last division, the longest shot on the board, 39-1 Bellows Binge, followed Eddard Hanover around the final turn, then caught that rival in the last couple steps. He posted a nose victory in 1:53, lowering his mark five seconds for trainer Dirk Simpson and owners Desyllas Racing LLC, William Beck and Carol Rieken. Driver Dan Rawlings guided the son of Bettors Delight.

Truemass Volo shot the Lightning Lane and triumphed in 1:56.2 for Matt Kakaley, trainer Doug Hamilton and owners Jon Erdner and Martin Garey. Meadowbranch Memo rallied for place, three-quarters of a length back, with Mac Deeno third.

Hamilton said that after facing tough competition in the Beal and the Stanley Dancer, the Muscle Massive-Tresbien Volo gelding was able to show he belongs with his division’s elite.

“I don’t think he can beat them on a consistent basis, but he’s one of the top ones,” Hamilton said. “He just hasn’t showed it yet. He’s had a lot of bad luck, and we’ve been going through an educational process with him.”

Roccos Tacos overcame post eight to capture the other Manderino split in 1:56.4 for Zendt, Melander and owners John DeVito and Rocco Manniello.

Pittstop Danika, benefiting from a first-quarter break by favoured Watch What You Say, made every pole a winning one in posting a three and a quarter length victory over Dangerous Woman in the first division. The daughter of Yankee Cruiser took a maiden mark of 1:55 in the off going, with Matt Kakaley handling the lines for trainer Ron Burke (who got cheques with each of his three entrants in the division) and the partnership of Burke Racing Stable LLC, Weaver Bruscemi LLC and M1 Stable. Watch What You Say, who went into the infield to get squared away, made a fine recovery and survived an inquiry to be third.

“This was a little bit easier spot for her,” Kakaley said. “Outside posts against Sires Stakes horses are real tough. She’s been racing good. She has a good attitude, and she has a good future.”

Burke came right back in the second division with Make Mine Mocha, a Bettors Delight filly who visited Victory Lane for the first time after drawing off to a two and a quarter length victory in 1:54, with the track upgraded to 'good' for the last two Miller cuts. Mike Wilder quarter-moved with Make Mine Mocha, and the pair was not in doubt thereafter while winning for Burke Racing Stable LLC, Phil Collura, Michelle Yanek and Weaver Bruscemi LLC.

The final division produced an impressive winner in another daughter of Yankee Cruiser, Keystone Rampage, who moved to the lead in front of the stands, then scooted home in :28 to trip the timer in 1:53, two ticks off the stake record. Dave Palone was in the sulky behind the victorious filly, who took a new mark for trainer Kevin Lare and owner Frank Chick.