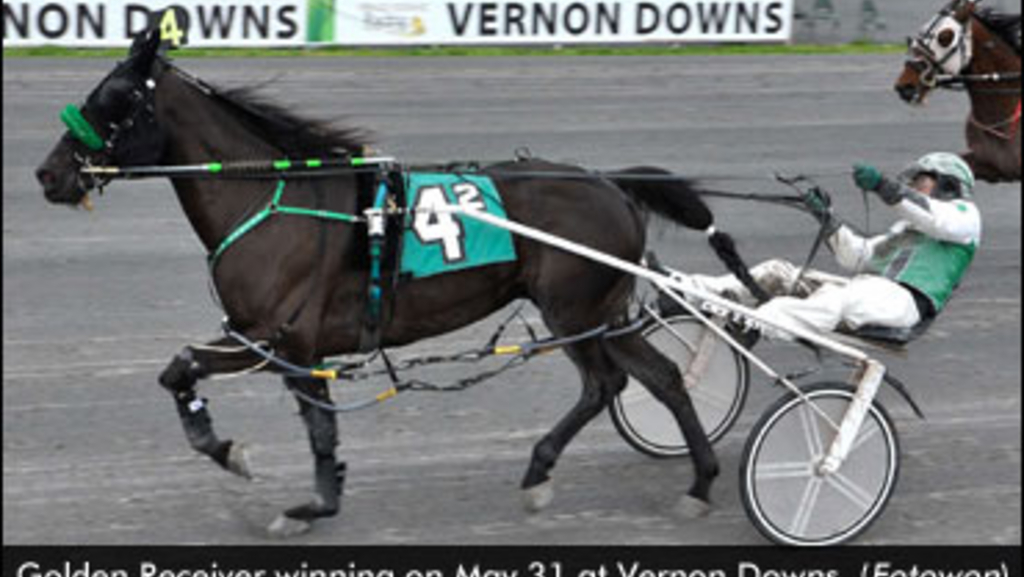 Making his much-anticipated return from a retirement, which ultimately resembled a winter layoff, double millionaire Golden Receiver ($4.70) proved triumphant over his four rivals in Sunday (May 31) afternoon's featured $10,000 Open Pace at Vernon Downs.

Before the race, trainer Allie Berube expressed nothing but optimism.

"We're excited for Golden Receiver's return and he is very excited to be back on the racetrack," she said. "He's feeling very fresh and we hope for a successful season."

That optimism was fulfilled in the 10-year-old Village Jove gelding's return, as Fern Paquet Jr. sent him straight to the front from post four to control a :26.4 first quarter-mile while tracked by A Fool For Mark (Dustin Ingraham). After rating a :30.1 second quarter breather, Golden Receiver faced a stern first-over challenge from Damon Blue Chip (John MacDonald), who forced a :27.4 third quarter while closing to within a neck. The challenge wasn't too tough for Golden Receiver, who kicked clear off the turn, holding clear of the late-charging JK Panache (Chris Lems) by two lengths in his 1:52.3 score over good going. Damon Blue Chip faded to third, while A Fool For Mark and UF Bettors Hanover (Justin Huckabone) rounded out the field of five.

Berube continued to tell how Golden Receiver's return campaign would carry a nobler cause.

"His proceeds will be donated to amazing causes thanks to his generous owners, the Our Horse Cents Stables and Nina Simmonds [of Golden Receiver LLC]," she said. "Golden Receiver has a tremendous fan club and we're certain he will not disappoint."

If today's effort was any indication, Golden Receiver still has the ability to do a lot of good -- both on and off the racetrack.

While Golden Receiver was the equine star at the Miracle Mile today, four drivers each tallied two wins on the 11-race card. Adam Capizzano, Truman Gale, John MacDonald, and Jimmy Whittemore all recorded doubles on the afternoon program.