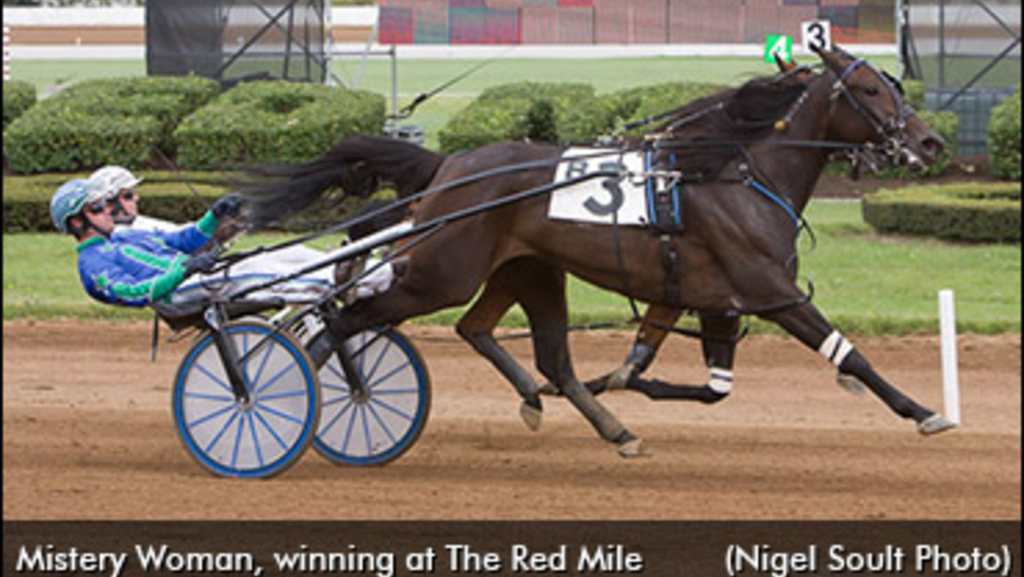 Trot Insider has learned that world record holding trotting mare Mistery Woman has been retired and will join the broodmare ranks.

Co-owner and trainer Jonas Czernyson confirmed the news on Monday morning. Her last start came on Friday night at The Meadowlands, finishing sixth in a C1-B2 class event.

"We were to breed her this year anyway, and we said we'd keep on racing her as long as she enjoys it and is racing good," Czernyson told Trot Insider. "The last few starts she just hasn't been herself. I don't want to cheapen her; she's done a lot for us. Now is as good as time as any to take her home."

Owned by Czernyson's Millstream Stable LLC with Aldebaran Park Inc. of Allentown, N.J., Mistery Woman was purchased from the 2011 Lexington Selected Yearling Sale. Sold as Do Not Lindy, the daughter of Donato Hanover was a $102,000 yearling. She won three of five starts at two and took a mark of 1:53.3 at The Red Mile. She then lowered that mark to 1:52.1 at three with her win in the $150,000 Zweig Filly Trot at Vernon Downs.

Once again shaving off more than a second of her lifetime best, Mistery Woman set a world record at four by defeating the division's top trotting mares in the 2014 Allerage Open Mare Trot with a 1:51 mile. It was the fastest trotting mile on a card that also featured the Allerage Open Trot, the Kentucky Futurity and Filly Futurity.

Prior to her world record-setting effort at The Red Mile, she trotted over Mohegan Sun Pocono in 1:51.3f, just missing the world record over a five-eighths mile track by one-fifth of a second.

"She's a very good athlete, she likes what she does and she was pretty easy to get along with," noted Czernyson, hoping that her foals pick up her strong gait and attitude as well.