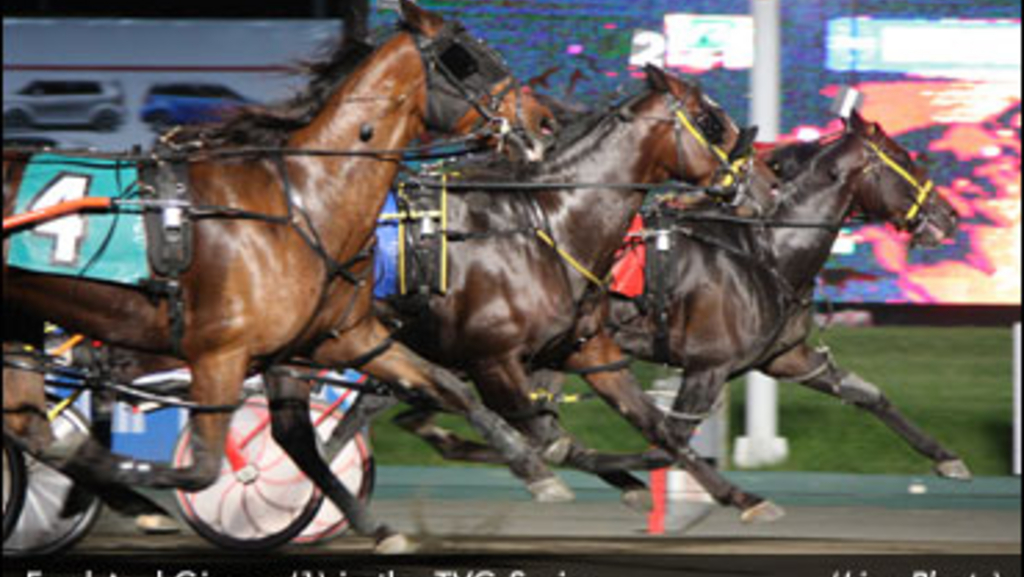 Meadowlands Racetrack hosted a stakes-packed program of harness racing on Saturday night featuring a pair of Golden Girls divisions, a quartet of New Jersey Sire Stakes Championships, and another leg of the TVG Free For All Series.

Feeling You and Rocklamation won the divisions of the $183,400 Golden Girls for pacing mares.

Feeling You, the 2-1 second choice, edged Anndrovette, the 1-2 favourite, by a nose in the first division. Andy Miller drove for trainer Amber Buter as the six-year-old won for the eighth time in 13 starts this season. The time for the mile was a lifetime-best 1:48.4, equalling the stakes record set by Burning Point in 2005. She paid $6.40 to win.

Rocklamation rallied to beat Krispy Apple by one and a quarter lengths in the second division. Gingras was at the lines for trainer Ron Burke as the five-year-old paced the mile in 1:49.3. She paid $6.20 to win as the 2-1 favourite.

In the first $90,450 Golden Girls division, Anndrovette surged to the lead approaching the opening quarter with Feeling You sitting right behind. They maintained that order until Feeling You challenged at the top of lane. Feeling You surged to a short lead, but Androvette was not done. The champion older pacing mare the last two seasons exerted her class battled back to force a photo finish. At the end, Feeling You prevailed by a nose. Ginger And Fred was third.

Rocklamation has a big finishing kick and Gingras timed it perfectly in the second $92,950 division. A hard-charging second last weekend in the Betsy Ross at Harrah’s Philadelphia, Rocklamation got all the money this time with a powerful :26-second final quarter. Economy Terror, the Betsy Ross winner, battled her way to the front with a long, determined grind. That effort left her vulnerable as Rocklamation stormed home for her 18th win in 68 starts. Drop The Ball was third.

“The bigger the track, the better it is for her,” said Gingras. “She’s got one big half, and you don’t want to use it too early.”

The five-year-old daughter of Rocknroll Hanover is owned by J & T Silva Stables, Stable 45 and Our Horse Cents Stables. 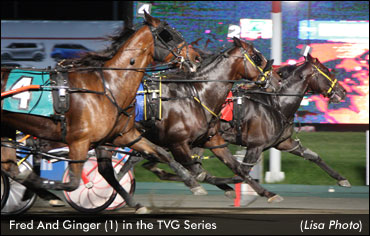 The best of the action of the evening came in the TVG Free For All as Fred And Ginger split rivals in deep stretch for a dazzling 1:47.3 victory. It was a mile full of thunder and fury.

The six-year-old has now swept the first two legs of the series that culminates with a $500,000 final here on Nov. 30.

Each TVG Series win is worth 35 points, giving Fred And Ginger the early leadership role with 70 points.

Golden Receiver, as expected, blasted right to the lead. In a stunning move, Pet Rock, making his first start of the season, took it right to the leader. They hooked up in a blazing :25.3 opening quarter and continued to knock heads down the backside. Gingras, seeing the speed duel developing, unleashed Sweet Lou with a three-wide sweep. Last week’s Maturity winner took it to Golden Receiver and Sweet Lou eventually won that battle. But it came at a cost. Sweet Lou battled on bravely, but Fred And Ginger, who saved all the ground, snatched away the win by a head. Modern Legend finished a neck back in third.

“I wasn’t that surprised,” said driver Ron Pierce of the sub-1:48 clocking. “The conditions were right and you’ve got great horses.”

It was a 1-2 finish for trainer Ron Burke. He also sent out fourth-place finisher Dynamic Youth, who was coupled in the betting with Fred And Ginger. The entry paid $8.20 to win. Fred And Ginger is owned by J & T Silva, Howard Taylor, Edwin Gold and Robert Feldman.

Smilin Eli continued on the road to the $1.2 million Hambletonian on Aug. 3 at the Meadowlands with a another impressive win in the New Jersey Sires Stakes.

The quartet of stakes turned into a showcase for the unbeaten Smilin Eli. The son of Muscles Yankee, owned by Nicholas Cimino, is now a perfect three-for-three in his career following an impressive 1:52.1 win. The time equalled the stakes record set by Manofmanymissions in 2011.

As usual, Tim Tetrick was at the lines for trainer Deshawn Minor and the 1-10 shot never had an anxious moment. Smilin Eli took command entering the backstretch and the contest was over.

“I wanted to be in charge,” said Tetrick. “He didn’t really want to settle. I just let him go ahead and move. I thought I had the best horse. I didn’t want to take any chances of making a mistake back there, so I just went ahead and put him on the front.”

Corky gave chase, but could only trim the final margin to two and a quarter lengths.

The latest win has Tetrick dreaming the Hambletonian dream.

“You’re always hoping to find that special one,” said Tetrick. “Everything right now is going in the right direction. He’s pointing that way.”

Muscle Mountain was third to give trainer Jimmy Takter a two-three finish in the stakes.

Shared Past took the trotting filly NJSS in 1:53.4 as the 4-5 favourite, seizing the moment with a three-wide sweep at the midpoint on the backstretch. Shared Past held off Miss Steele by three-quarters of a length for her second win in as many starts this season. Vintage Oaks was third.

“I don’t think today was her best performance,” said Gingras. “She’s a very nice filly and she came back strong as a three-year-old, but I think she was better in the eliminations. Maybe there’s a little something there. That’s scary to say after she just won, but I don’t think she was 100 per cent.”

It will be up to Jonas Czernyson to resolve any issues. He trains the daughter of Chocolatier for W.J. Donovan.

Rockin Amadeus weaved and bobbed through the lane, but he kept moving forward with enough momentum to squeeze out the win by a neck in the colt and gelding Championship. The 1-2 favourite was timed in 1:49.3 as Gingras picked up another stakes win, this time for trainer Jimmy Takter. The Breeders Crown champion in a 17-1 upset last season, Rockin Amadeus is now two-for-two this year for Lothlorien of Cheltenham, Ont. Johny Rock was second, followed by Wake Up Peter.

The top three finishers are all eligible to the upcoming Pepsi North America Cup with Rockin Amadeus one of the early favourites, ranked third at odds of 6-1, in Trot Magazine's 2013 Spring Book.

Ms Caila J Fra closed out the NJSS with a stakes record 1:49 performance in the filly pace with Simon Allard in the sulky for trainer Steve Elliott and the Fra Stable. Jerseylicious was second followed by O'Brien Award winner I Luv The Nitelife.

O Narutac Rockette went on a break and fell in the stretch, but Pierce did a commendable job of holding onto the reins, keeping the filly under restraint after she bounced back up.

On the wagering front, it was one of the best nights of the year. The total handle of $3,507,651 was an increase of $1,098,490 from the same Saturday in 2012, or a resounding 46 per cent. Just as exciting were the increases shown on track. Attendance was up 50 per cent and the on-track handle showed an increase of 15 per cent.

Racing returns on Friday, with the start of the Summer Survivor Series with post time at 7:15 p.m.