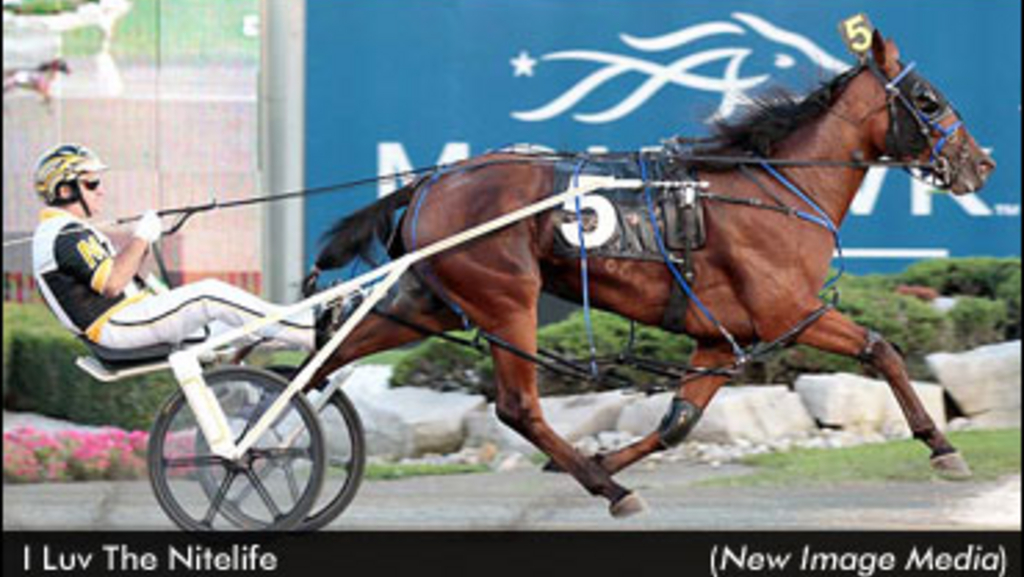 O'Brien Award winning pacing filly I Luv The Nitelife made her first qualifying start of the year on Saturday morning at Meadowlands Racetrack along with a host of other 2012 standouts.

Driven by Tim Tetrick in her first charted mile since last October's Breeders Crown, I Luv The Nitelife swept to the lead around Lady Ideal after the :28.4 opening quarter and cruised through middle splits of :59.3 and 1:28.4 before unleashing a :26.4 final frame to draw away by nearly eight lengths. The mile time was 1:55.3.

The three-year-old daughter of Rocknroll Hanover out of Lisjune put together a record reading 4-4-1 in 10 freshman starts to bank $682,574 in purses for trainer Chris Ryder and owners Richard and Joanne Young of Coconut Creek, Florida. In addition to setting a world record of 1:50.1 in an elimination of the Shes A Great Lady at Mohawk Racetrack, she also won the final along with divsions of the Eternal Camnation and Bluegrass Stakes. I Luv The Nitelife was also a runner-up in the Champlain Stake, International Stallion Stakes and Breeders Crown.

She is expected to qualify again at Pocono Downs one week from Thursday.

New Jersey Sires Stakes champion pacing filly Authorize, who won the International Stallion Stakes over I Luv The Nitelife last year, was also victorious in her three-year-old debut for Brian Sears and trainer Tony Alagna, edging out Wherethegirlsare by a nose in 1:56.1.

New Jersey Sires Stakes champion Major Bombay, driven by Andy Miller and trained by Alagna, sprinted home in :26-seconds for a 1:53 victory in the first qualifier of his four-year-old season, which was packed full of other stars from last year's Glamour Boy division. Hurrikane Kingcole finished two lengths behind in second, while Mel Mara was third. Dynamic Youth was fourth and Sweet Lou finished fifth with the fastest final quarter of them all, clocked in :25.4.

Corky, another New Jersey Sires Stakes champion and the Peter Haughton runner-up, won his first sophomore qualifier in a career-best 1:56.4 by one and a half lengths for David Miller and trainer Jimmy Takter.

Breeders Crown champion Rockin Amadeus returned for his second qualifying win of his sophomore campaign for Takter and owner-breeder Lothlorien of Cheltenham, Ont. Yannick Gingras sent the Rocknroll Hanover-Kikikatie colt to the lead and carved out fractions of :27.4, :58, and 1:26.2 en route to a three and a half length victory in 1:53 flat (final quarter clocked in :26.3). Fellow North America Cup eligibles Dedis Dragon and Martini Hanover finished second and third.

Kentucky Futurity champion My Mvp turned in a 1:57 mile during his 2013 debut for Alagna, finishing fourth in a qualifier won by the Tony O'Sullivan-trained Preferred trotter Undercover Strike in 1:56.3.