Chapter Seven equalled his own 1:50.4 world record as he trounced the competition in the $201,700 Titan Cup on Friday night at the Meadowlands Racetrack. 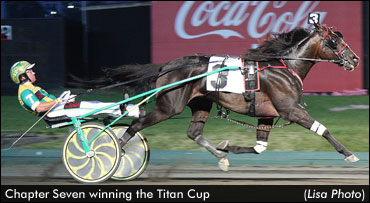 Chapter Seven and driver Tim Tetrick sat third while Winning Mister carved fractions of :27.1, :55.3 and 1:23.3. Tetrick angled his charge out at the three-quarter marker and Chapter Seven easily rolled past the pacesetter to a two and three-quarter-length victory. He paid $2.60 to win the sixth race feature. Arch Madness sat snugly in the pocket the whole way and finished second. Winning Mister held third.

“He’s as good as any horse I’ve ever seen,” Tetrick said. “Last year, he had the will and desire to do it, but he found three seconds. This horse is just amazing right now. He’s doing it like he’s going a mile in 1:55. He’s right on his game right now. They’re very good horses and Winning Mister is no slouch. I’ve driven him, and he’s tough as nails. He’s tough to get by and my horse got by him freehanded.”

Chapter Seven established the 1:50.4 record, an all-time best for a four-year-old trotting horse over any size track, in his season debut, the Titan Cup Prep, on June 23 at the Meadowlands.

Trained by Linda Toscano, he is the first trotter in harness racing history to open his season with consecutive world records.

“He’s a career horse,” Toscano said. “Everyone waits a lifetime for a horse like this. Nothing he does surprises me, only that he got ready as quickly as he did this year. He’s always wanted to do it. His desire is strong, his gait is good. He’s a stronger, better version of what he was last year.”

Chapter Seven, a son of Windsongs Legacy, improved his record to 14 wins in 20 career starts and surpassed $1 million in career earnings in the Titan Cup. He is owned by Richard Gutnick of Blue Bell, Pennsylvania, Gary Cocco of Newtown Square, Pennsylvania, Southwind Farm of Pennington, New Jersey, and Jerry and Theresa Silva of Long Beach, New York.

Making their career debuts, Odds On Alpha (Somebeachsomewhere-Odds On Arttoheart) and Shebestingin (Bettors Delight-Armbro Tussle) turned in matching 1:54.1 victories in the two-year-old filly splits. John Campbell drove Odds On Alpha to her two and three-quarter length victory for trainer Robin Schadt and Odds On Racing while the David Miller-driven Shebestingin won her division by a neck for trainer Joe Holloway and owners Val Dor Farms, Theodore Gewertz, and L And L Devisser LLC.

Driven by Tim Tetrick, Troon (Rocknroll Hanover-Madura) also matched that mark winning the first two-year-old colt division by one length while Duel In The Sun (Camest-Magical Western), in rein to Brian Sears, stopped the clock in 1:55.2 with one and a quarter lengths to spare in his event. Both colts are trained by John Butenschoen with Vip Internet Stable LLC as part owner. Troon is also owned by Gary Bury and Duel In The Sun is co-owned by William Wiswell.