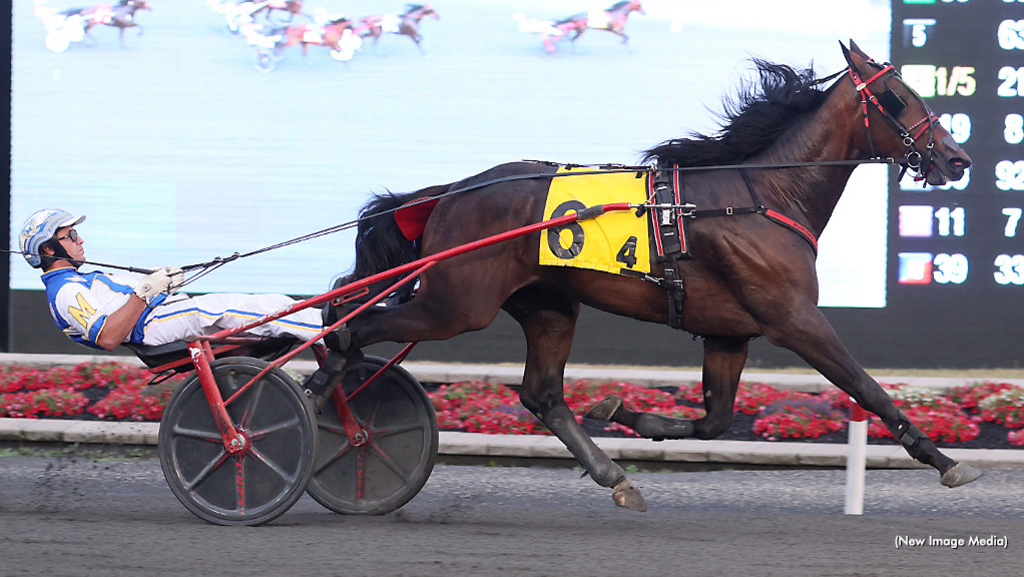 Odds-on choice Lukes Bar grabbed the lead moving past the half and coasted to a 1:56.1 win in the $90,500 Millard Farms Final on Thursday night (Aug. 4) at Woodbine Mohawk Park.

Driver James MacDonald floated away fourth while Craft Made fought for the lead to a :28.4 first quarter with Jokic challenging. MacDonald then motored Lukes Bar for the front passing a :58.4 half and cruised to three-quarters in 1:27.2 while kicking four lengths clear into the stretch. Ghostly Caper closed off cover to snag second by 2-1/4 lengths with Southwind Coors rallying for third and Jokic settled for fourth.

Menary Racing Inc. and Anthony Timmins own Lukes Bar, who won his second race from three starts and has now banked $59,250. Dave Menary trains the $2.40 winner.

Tactical Planner pulled a large upset as the longest shot on the board in the $80,500 Pure Ivory Final later in the card.

Shiny New Penny pushed for the lead to a :27.3 first quarter but yielded to Silly Me Hanover as she, the 1-5 favourite, swept to the top before a :57.1 half. Shesundertheradar moved first over to the far turn while Tyler Jones caught cover with Tactical Planner to race third over to three-quarters in 1:27.2. With Silly Me Hanover shortening stride, the field stacked coming for the finish with Tactical Planner towering off cover and landing at the beam a half-length better than Warrawee Yes surging late at 33-1 for second. Silly Me Hanover settled for third and Last Page First took fourth.

Bankers Luck powered from post 10 to score a coast-to-coast win in the second leg of the Whenuwishuponastar. The Tony Alagna-trained daughter of Hes Watching soared to the top after a :28 first quarter and cruised to a :56.2 half under no pressure. Treacherous Penny mounted a first-over bid to three-quarters in 1:25 but stalled in the sprint for home where Bankers Luck stood her ground and kept 1-1/4 lengths in front of surging Sylvia Hanover, who settled for second as the 7-5 favourite. Treacherous Penny took third and Always B Star rode the pocket to finish fourth.

A homebred for Brittany Farms, Bankers Luck has earned $44,548 and collected her third win from five starts. Doug McNair drove the $10.20 winner.

None of the punters were able to hit the early Pick 5 on Thursday's card, and thus the carryover going into Friday's card stands at $58,787.87.