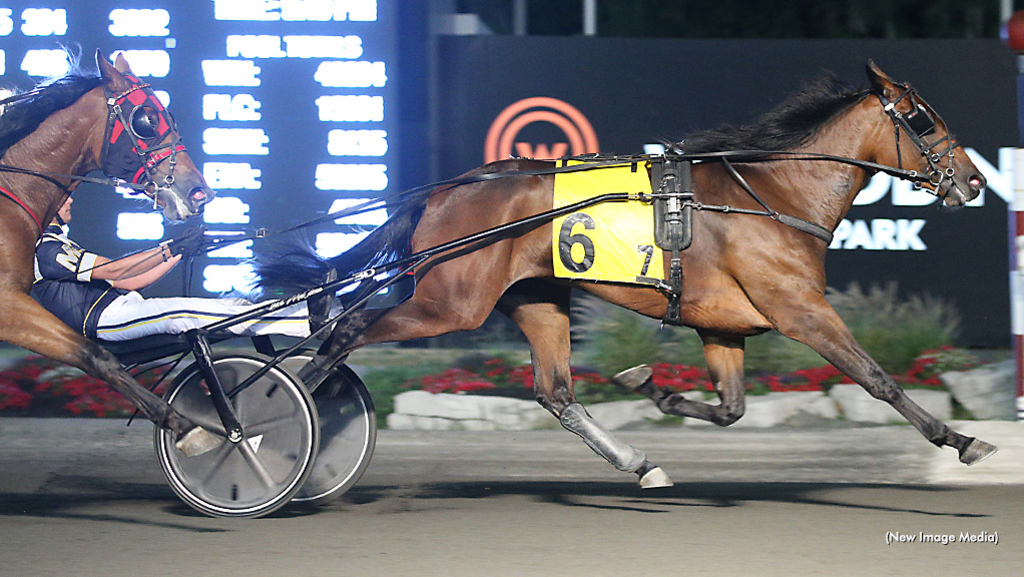 Silly Me Hanover emerged from the pocket off the final turn and slid to a 1:56.1 win in taking the second of two $20,000 opening-preliminary divisions of the Pure Ivory series at Woodbine Mohawk Park on Thursday night (July 21).

Luc Blais trains Silly Me Hanover for owner Determination. She won at first-asking, earning a $10,000 cheque, and paid $4.40 to win.

Foolish Moni trotted a front-stepping mile in the other Pure Ivory split to post a 1:58 win. The daughter of International Moni motored to the point to lead to a :29 first quarter while snagging a breather to a 1:00 half. Although a first-over bid loomed from Quite Fast to the final turn, Foolish Moni held her at bay by three-quarters in 1:29.3 in progress to a three-length victory. Warrawee Yes tracked Quite Fast's cover to take third while Sound Advice faltered off a pocket trip to fourth.

Trainer Blake MacIntosh co-owns Foolish Moni with Tim Klemencic. She broke her maiden in her third start, has now earned $12,125 and paid $6.60 to win.

Lowry trotted the faster mile of the two $20,000 opening splits for the Millard Farms Series, winning in 1:57.1. After taking the lead to the first turn, driver Chris Christoforou yielded command to Mass Market by a :29.1 first quarter before tipping Lowry back off the pegs to retake the lead past a :59.1 half. The Father Patrick gelding then faced a first-over push from Mass Market to three-quarters in 1:28.2 before that rival tired through the stretch, leaving Lowry just to contend with the fresh legs of Gaines Hanover. He held off that one's late charge, however, to win by three-quarter lengths. Dyladmar finished third and Mass Market checked in last of the abbreviated field.

Conditioner John Bax co-owns Lowry through his Bax Stable with Brad Grant and Steve Heimbecker. He won his second race from three starts and has now earned $22,000. He paid $8.40 to win.

Jokic jolted off cover to land a 7-1 upset in the other Millard Farms division. Sitting fourth while Ghoslty Casper grabbed the lead by a :29.1 first quarter and controlled to a :59.2 half, Jokic moved off the pegs as What An Angel challenged the leader by three-quarters in 1:29.4. Gradually, the Cantab Hall gelding reeled in the competition and fought Ghostly Casper to the finish as the game favourite conceded at the beam by a neck in a 1:58.1 mile. Southwind Coors closed from last for third and Craft Made rode the pocket to finish fourth.