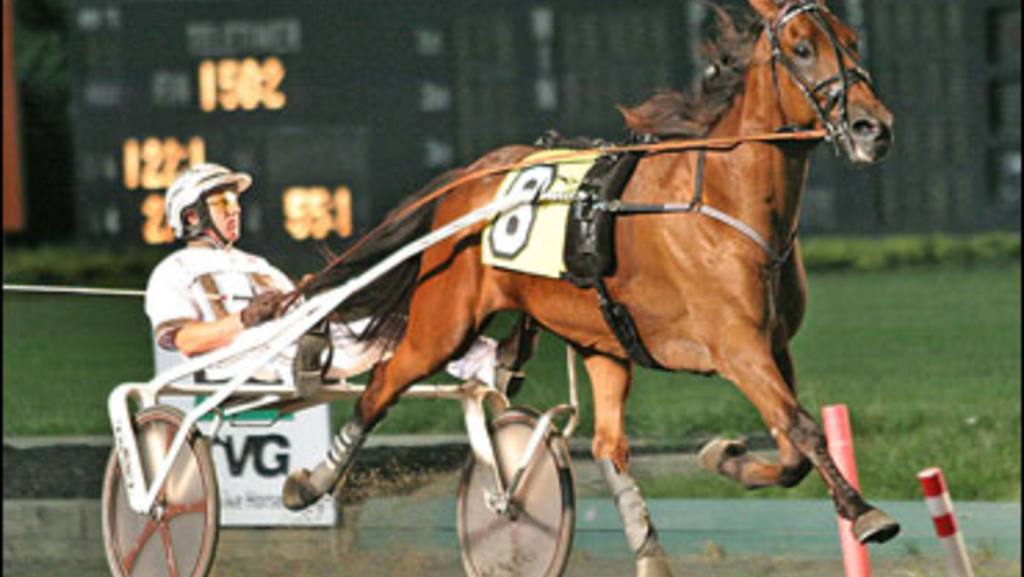 Arch Madness set a track and world record for an older trotting gelding with a 1:50.2 clocking in the $220,750 Titan Cup on Saturday night at Meadowlands Racetrack

Arch Madness cleared the lead from Lucky Jim after a :55.1 half and drew off to an eight-length victory. He supplanted Victory Tilly's 2002 record (for geldings five years old and up) in the Nat Ray by two-fifths of a second. Lucky Jim was far behind in second, while Slave Dream picked up the show money.

"We were stepping out of there and it looked like they were going to mix it up early," Sears said. "I let it play out and it worked out well. He's super sharp; they've done a great job with him."

Arch Madness, trained by Trond Smedshammer, is now two-for-two since returning from a short campaign in Europe. The seven-year-old gelding has won seven of eight starts in 2011, including the Oslo Grand Prix. His only loss this year came in Sweden's Elitlopp. He won his elimination race before finishing sixth in the same-day final on May 29 at Solvalla.

"He is starting to live up to what we thought he could do," Smedshammer said. "He has had some bumps along the road. He always showed greatness, but he wasn't always the most consistent horse. This is the horse we thought he would be as an aged horse. I thought he would show it as a five-year-old. He didn't have a great year then, but this is certainly his year now."

Rockem got up in the final strides to win the $100,000 Summer Survivor Final for three-year-old colt and gelding pacers.

"He's not good about getting into gear real quick," Miller said, "but he got out of there on the right foot. He got away in a good spot and ended up getting a good trip."

Rockem rolled to his fifth win in eight starts this season for trainer Casie Coleman and owner Jeff Snyder. The son of Rocknroll Hanover-Don't Toy With Me was bred in Michigan by Patti and Bill Gira's Oldfield Farm.

The first leg of the New Jersey Sire Stakes for two-year-old pacing colts and geldings was also contested Saturday night at Meadowlands Racetrack.

E Street Plan captured the first $27,000 NJSS division with Yannick Gingras at the lines. After avoiding troubles from late stretch breakers, the colt kicked home to post a mark of 1:54.

The son of Rocknroll Hanover-Plan On It was a $57,000 yearling purchase from the Lexington Selected Sale in Lexington, Kentucky for owners W Springtime Racing Stable, Shannon Brott, Cataway Racing Stable and Pat Caturano. The Mark Harder trainee paid $18.60 to win. Runner-up Rockndream finished a length back, while Brent Montana was third.

Simply Business came first over at the half-mile marker and held on to win the second division for a purse of $26,500. Under the guidance of Ron Pierce, the colt posted a 1:54.3 win over runner-up Pet Rock and third-place finisher, W H Skooter.

The son of Rocknroll Hanover-Cathedra Dot Com was purchased for $350,000 at the Lexington Selected Sale, making him the top yearling of 2010. Jimmy Takter trains Simply Business for owners Brixton Medical Ab, Order By Stable, Louie Camara and Marvin Katz.