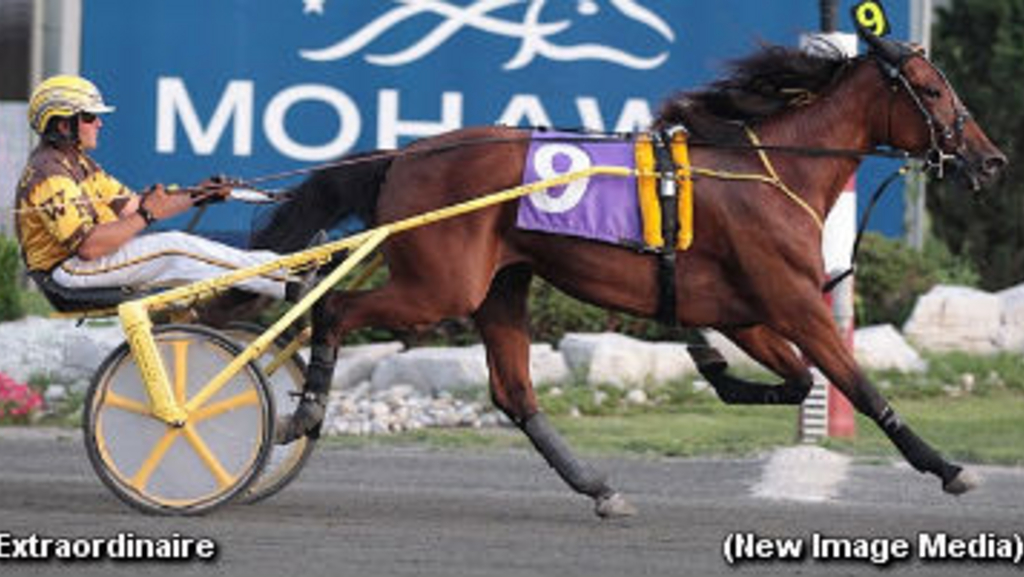 The Ontario Sires Stakes rolled into Campbellville, Ontario on Monday evening, and with it came the province’s most talented two-year-old trotting fillies for a quartet of Gold Series eliminations

Peach Martini was sent to immediate command in her $40,000 tilt, and the daughter of Striking Sahbra-Armbro Martini could not be caught. She laid down fractions of :29.1, :59.3 and 1:30.4 for trainer/driver Rick Zeron, who used a :29-second closing panel to seal the deal by five lengths in a time of 1:59.4. South Bay was next best and Miss Janine rounded out the top three finishers.

Rick Zeron Stables, Rojan Stables, Michael Katz and Stephen Waldman share ownership on the two-time winner, who bumped her bankroll to $72,500 with the win. She has more than recovered her $25,000 price tag from last year’s Harrisburg Yearling Sale.

Extraordinaire used her gate speed to dive into an early three hole for trainer/driver Wayne Henry, who found late room for the daughter of Duke Of York-She Has It who used a fiery final quarter of :28.4 to win in 1:59.3. The rookie, fresh off her win the $130,000 O.S.S. Gold Series final at Flamboro Downs on July 23, drew away to win by a three-length margin over Herbies Lenu. Ms Canada Kadabra came on strong to finish third.

Henry Stable of Arthur and Jim Laverty of Sauble Beach, ON share ownership on the talented trotting miss, who has stashed away more than $88,000 in her first three assignments. That’s a great return on investment considering she was purchased for $16,000 from last year’s Forest City Yearling Sale.

Enchantment erupted for a 28-1 upset in the third elimination for the tandem of driver Keith Oliver and trainer Bill Companion. The daughter of Angus Hall-Madam Super Bowl overcame a first-over trip and drew clear to win by 1-3/4 lengths over My Whispering Eye in a time of 1:59. Race favourite L A Freeway was third.

Common Sense Stable of Rockwood and Kor Stable Limited of Guelph, ON share ownership on the maiden-breaking winner, who was a $20,000 purchase from last year’s Lexington Select Yearling Sale.

Marys Out Cruisin was a popular winner in the final elimination for the combination of driver Trevor Ritchie and trainer Torgeir Hagmann. The Here Comes Herbie-Mary Lou Hall miss came first-over and wore down Scorpius en route to the 1:59 tally. Here Comes Jenny was third.

It was the first lifetime win in two trips postward for Marys Out Cruisin, who is owned by Kjell Magne Andersen of Oslo, NOR and David Goodrow Stable of Cambridge, ON. The filly, who is a half-sister to Crazed (1:52.2 - $1,072,659), was purchased for $190,000 from last year’s Harrisburg Yearling Sale.

The top two finishers plus two of the third-place finishers from Monday’s eliminations will return to Mohawk Racetrack next Monday to contest the final. Here’s how they’ll line up on the starting gate: