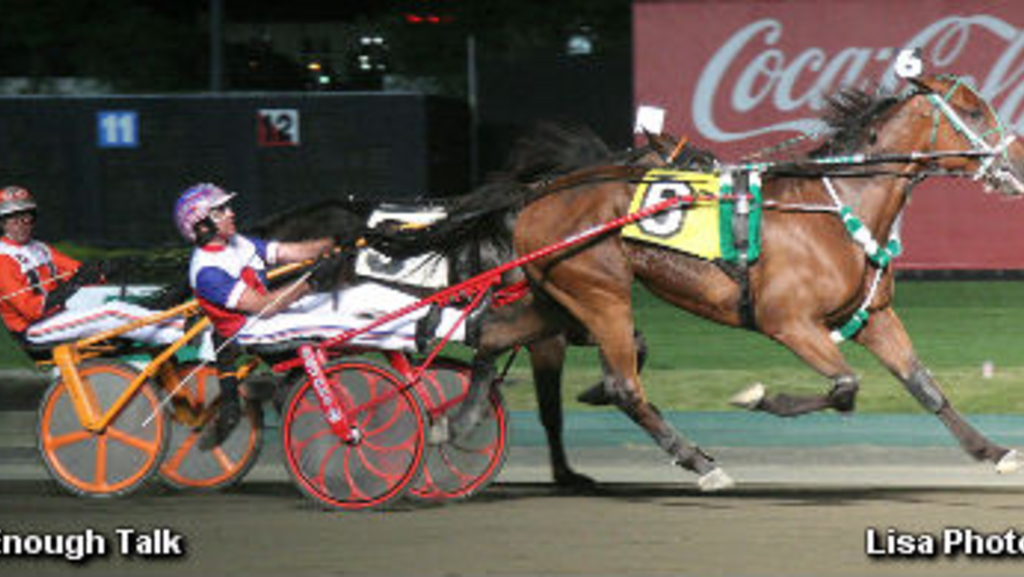 Enough Talk wore down arch rival Lucky Jim in the stretch to win the $235,750 Titan Cup on Saturday evening at the Meadowlands Racetrack

Enough Talk tracked Lucky Jim down the backstretch and was left right at his wheel as the latter took command from Likeabatoutahell in a :54.4 half-mile split. The two horses raced in tandem until Enough Talk drew clear in the final strides, edging his rival by a half-length in 1:52. Buck I St Pat rallied to finish a length behind them in third. Piloted by Ron Pierce, Enough Talk paid $6 to win the eighth race feature.

"I didn't like my spot at all [outside Lucky Jim]," Pierce said. "I tried that before [racing first up with him] and it didn't work out too good earlier in the year. In the whole race, nothing went my way. I knew Lucky Jim was going to shoot to the front first, and that Arch Madness would be on my tail. Those are the two horses to beat in there, so I was not in a good spot at all. I got up alongside Lucky Jim in the turn. I didn't hear Arch Madness on my back, so I was wondering what happened to him. I kept thinking that Lucky Jim was going to kick in his afterburners and take off and he never did, so we just staggered home in 1:52 and won the race.

"He's gutsy," Pierce continued. "He has a big set of lungs and tries his heart out every week. He's a world record holder and he's beaten the best in the country for the past three to four years now. He's a great horse."

"Enough Talk looked really good alongside of me and I was hoping we'd come out the winner," said Andy Miller, driver of runner-up Lucky Jim. "I knew it would be a race all the way to the wire, but unfortunately [Enough Talk] won. Congratulations to him. My horse raced good and raced him right to the wire."

Enough Talk, trained by Peter Kleinhans, is two-for-two since returning from a three-race European campaign in June. Lifetime, the 2008 Older Trotter of the Year has won 31 of 79 starts and close to $1.4 million. Kleinhans shares ownership of the seven-year-old son of Enjoy Lavec with Jerry Silva.

"I was very surprised he was able to win from first over because he really doesn't like to race that way," Kleinhans said. "He can, but when he's against the best horses, he usually can't sustain his move. This is actually the first time he's been able to beat the best horses that way. At the half, I really didn't even think we'd finish in the top three.

"He's had no problem at all since he came back from Sweden," he continued. "He came off the plane feeling fresh and he's been good ever since. Next he'll go to the Maple Leaf in Canada and then back [to the Meadowlands] for the Nat Ray [August 7]."

BGs Folly tipped to the outside at the half and steamrolled past the leaders to win the first of two $38,100 Jersey Cup divisions in 1:50.3 on Saturday night at Meadowlands Racetrack.

BGs Folly, driven by Brian Sears, scored his second straight stakes trophy after a similar first up stunner in the $500,000 Anthony Abbatiello New Jersey Classic on June 12. Trained by George Berkner, BGs Folly paid $5 to win the second race of the night. Valentino, who cut the mile, finished three-quarters of a length behind the winner, while Foreign Officer held third.

"I thought Yannick [Gingras and Valentino] was going to give his horse a shot and leave out of there," Sears said. "The pace was pretty good. Coming down the stretch I thought I had a pretty good shot at the win. We're going to freshen him up because there's a lot of money left on the table still."

BGs Folly improved his record to five wins in 13 starts and surpassed $339,885 in earnings for the season. The son of Rocknroll Hanover-Art Amour was a $21,000 yearling purchase by Berkner's wife, Ginny, Martin Goldman, Chad Aaron and William Salmeri.

Ideal Matters led the field through a torrid opening quarter of :25.3 before Jo Pas Fod seized command. Nova Artist was next to challenge for the front, towing Rockin Image with him, as they hit the half in :53.1. Rockin Image and driver Yannick Gingras pressured Nova Artist into submission in a 1:19.3 third quarter and drew off to a length and a half tally. Sent off at 9-1, Rockin Image returned a $21 win payoff in the third race.

"It's not really what I expected [the fast pace]," Gingras said. "Jimmy [Takter] said he was the best horse in the race, but he had a choking problem and couldn't breathe. We're getting that fixed now, but it seemed like [following Nova Artist] was the move to make. I figured we had the win in the stretch. He would have been pretty hard to beat because he was going all out. He showed his class and he's probably one of the best horses in the country. He's hopefully headed to the Pace elims next week."

Lothlorien's Rockin Image posted his first win in four starts this season. The colt earned $287,340 during his two-year-old campaign, which included a victory in the Bluegrass Stakes at The Red Mile. Rockin Image is slated to make his next start in the July 10 eliminations for the $1 million Meadowlands Pace.

Takter also swept the Goshen Cup for two-year-old colt pacers prior to the start of the Saturday card with Rockin Image's full brother, Grams Legacy, and Rollwithitharry. Grams Legacy breezed to a 1:52 clocking in the first of the $38,700 splits with Ron Pierce in the sulky.

"The colt just drove me out of there, I went down the road and stayed there the best I could," Pierce said of Grams Legacy. "He sprinted out real nice. He's a good colt."

Rollwithitharry, also with Pierce in tow, cruised to a 1:52.3 victory in the second division. Takter's wife, Christina, shares ownership of the Rocknroll Hanover-Queen Otra colt with John and Jim Fielding and Louie Camara.