Enough Talk pounced off a pocket trip to take the $40,000 prep for the Titan Cup in 1:51 on Friday night at Meadowlands Racetrack

Driver Ron Pierce sent Enough Talk straight to the lead before taking a backseat to 2008 O'Brien Award winner Arch Madness (Brian Sears) past a :27.3 opening quarter. Arch Madness posted middle fractions of :55.1 and 1:23.3 before Enough Talk angled out and drew off to a two-length margin. After sitting fourth most of the mile, Lucky Jim (Andy Miller) moved to the outside entering the final turn and edged past Arch Madness for second. Sent off at 15-1, Enough Talk paid $33 to win the 10th race feature. 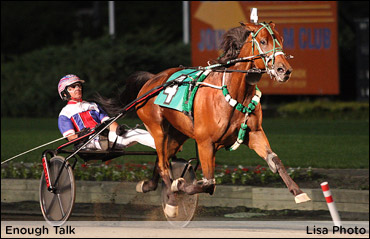 "My trip went perfectly," Pierce said. "I left out of there and scooted around a couple of them to get to the lead. After the quarter in :27.3, I let Arch Madness go. I just sat on his back, and my horse was trotting beautifully. I wasn't sure anywhere in the mile if I was going to get by Arch Madness until I actually went by him. He's such a good horse, but my horse, he was just awesome. He was perfect, straight as an arrow. Anytime you can get a two-hole trip following the one to beat in the race, and your horse is as good as this horse was, that's all you can ask for."

Enough Talk, trained by Peter Kleinhans, posted his 30th career win and first since returning from a three-race European campaign. The 2008 Older Trotter of the Year in the U.S. raced in the Elitlopp on May 30 in Sweden, but failed to reach the final after hitting his right knee during his elimination race. The seven-year-old son of Enjoy Lavec, who is co-owned by Kleinhans and Jerry Silva, has lifetime earnings of $1.2 million.

All eight starters in the prep race advance to the $200,000 Titan Cup final on Saturday, July 3. The field, in alphabetical order, is: Arch Madness, Buck I St Pat, Corleone Kosmos, Enough Talk, In Focus, Keystone Activator, Lanson and Lucky Jim.

The first leg of the New Jersey Sire Stakes for two-year-old pacers also shared the marquee Friday night. Lookinforadventure sat fifth the whole way and rallied late to win the first of the two $30,000 divisions for colts in rein to John Campbell. The son of Rocknroll Hanover-Student Driver won his career debut in 1:52.2. An $85,000 yearling purchase, Lookinforadventure is campaigned by trainer Bruce Saunders and owner Frank Bellino, the team behind North America Cup favourite Rock N Roll Heaven.

Its Rock N Roll held on after cutting the mile to win the second division in 1:54.1 for driver, breeder and co-owner Brian Sears. The son of Rocknroll Hanover-Art In Motion is a half-brother to gritty veteran Florida Boy, a career winner of nearly $600,000. Sears, who races as Sundance Stable, shares ownership of the colt with retired New York Jet wide receiver Wayne Chrebet, Curtis Larrimore and Carter Racing Stable (Albert Carter). George Teague Jr. trains the youngster.

Ivana Dance, a half-sister to champion mare Darlins Delight, won the lone $56,500 division for fillies. Driven by Yannick Gingras, Ivana Dance took command before the half and drew off to a length and a quarter victory in 1:55.3. Jeff Stafford trains the daughter of Rocknroll Hanover-Town Pro for owner-breeder White Birch Farm.

Millionaire pacing mare Tug River Princess was a wire-to-wire winner in Friday’s $32,000 Mares Invitational Pace for driver John Campbell and trainer Jeff Webster. The five-year-old daughter of Badlands Hanover-Aucryifiwanto carved out fractions of :27.1, :55.2 and 1:23 en route to equaling her lifetime mark of 1:50. Dont Deny Me (John Campbell) rallied off the cover of even-money favourite On The Glass (Yannick Gingras) to finish three-quarters of a length behind the winner. On The Glass was a length back in third. The Let It Ride Stables, Robert Cooper Stables and Jerry Silva share ownership of the winner.