Battle Tune Up For Stews Watching 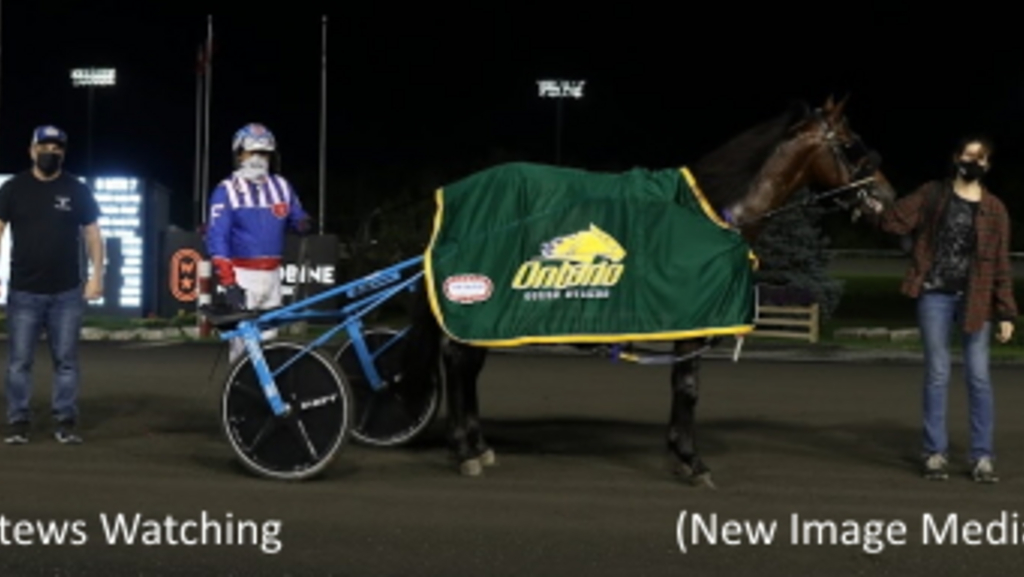 Stews Watching got his second straight Grassroots win on Monday, July 19 and Grand River Raceway fans may get a second look at the two-year-old pacing colt next Monday in the Battle Of Waterloo eliminations.

“I’ll talk to Mr. Ratchford and I would say there’s probably a good possibility that we’ll try him in the Battle of Waterloo,” said Dr. Ian Moore, who trains the colt for Ratchford Stable NS of North Sydney, NS. “I’ve got three other colts I might take up this year and I would say he’d probably want to go with him too. Sylvain (Filion) said he was good, he had lots left.”

In spite of a brief bobble leaving from Post 4, Stews Watching was in command by the halfway marker and never faced a challenge. The Hes Watching son and driver Sylvain Filion sailed home two and one-half lengths the best in 1:55.1. Hashtag Watch Me and Stone Carver followed the fan favourite under the wire in second and third.

Driver James MacDonald of Guelph, ON captured the next two Grassroots divisions, the first with Century Invictus and the second with My Blueberry Buck, and said the colts share both a lack of size and an abundance of skill with Stews Watching.

Starting from Post 2, MacDonald sent Century Invictus straight to the front and the fan favourite rolled along in comfort to a 1:55.2 personal best. Nassau Hanover was one and three-quarter lengths back in second and ATS Hanover was five lengths back in third.

“He drew inside and he’s a great-gaited horse, so I figured I’d try and take advantage of his strong suits and get him away close and see what happened,” said MacDonald. “He landed on the front, he felt good the whole way and when I growled at him on the last turn he just took off like an aged horse. He’s just getting a little bit better every time he races.”

Johnathan McKinnon trains the son of Bettors Delight for fractional ownership group TheStable.ca Century Invictus of Guelph, ON. The gelding won an overnight event at Hanover Raceway on June 26 and then finished fourth, after leading for much of the mile, in the Grassroots season opener.

My Blueberry Buck started at the opposite end of the gate, at Post 8, but MacDonald opted for the same strategy. The Thinking Out Loud gelding led the field through fractions of :28; :58.1 and 1:27.1 before sailing down the stretch to a two and one-quarter length win over fan favourite Lyons Pride and Highborn in a personal best 1:56.

“I raced that horse at Grand River a couple of weeks back so I knew he liked the track. The eight-hole sucks, but he’d already zipped out of there once at that track and he had some gate speed at Mohawk, so I knew it was there, and I knew I didn’t really have to watch him because he’s got a beautiful way of going,” said MacDonald. “It was a good trip for him and got the job done.”

Nick Gallucci trains My Blueberry Buck for owner-breeder Millar Farms. The gelding posted a 1:59.3 victory at Grand River Raceway on June 30 before finishing second in the July 9 Grassroots season opener. With one win and one second, he currently sits second in the freshman pacing colt standings, behind Stews Watching.

Sports Section started his Ontario Sires Stakes career in the Gold Series, but found the Grassroots much more to his liking on Monday. The Sportswriter son, in rein to Grand River Raceway’s leading driver Colin Kelly, sat mid-pack through the early going but after taking command just past the three-quarter marker he accelerated away from the field to a five and one-quarter length victory in 1:56.2. West Is Best and Southwind Pharoah rounded out the top three.

“I trained him down a fair bit this winter and I really liked him. He was a really nice colt. Jared did a heck of a job, he’s just like an old racehorse, you just do whatever with him,” said Kelly, who engineered the win for trainer Jared Bako and owner Dale Kerr of London, ON. “He’s a big strong colt and he’s good gaited, he could be very handy in the future. He can hopefully rebound and build off this start in the Grassroots, and hopefully if he can put a couple good starts in a row together, get his confidence back and everything, he’ll be good.”

Sports Section qualified smartly on June 25 at Woodbine Mohawk Park, but in the July 3 Gold Series season opener he faded to seventh after duking it out through sharp early fractions.

The final Grassroots division went to fan favourites Still Thirsty and Travis Henry, who went gate-to-wire in 1:56.4, holding off Juju Hanover by three-quarters of a length. Fox Valley Carlin was four lengths behind the leaders in third.

Henry guided the Thinking Out Loud gelding to his first win for trainer Bob McIntosh of Windsor, ON and his co-owner/breeder C S X Stables of Liberty Center, OH.

The two-year-old pacing colts will return to Grassroots action on Aug. 16 at Woodbine Mohawk Park, two weeks after some of them hope to appear in Grand River Raceway’s Aug. 2 Battle Of Waterloo Final.

Ontario Sires Stakes action continues at the Elora oval on Wednesday, July 28 with the second Gold Series Leg for the two-year-old trotting fillies.