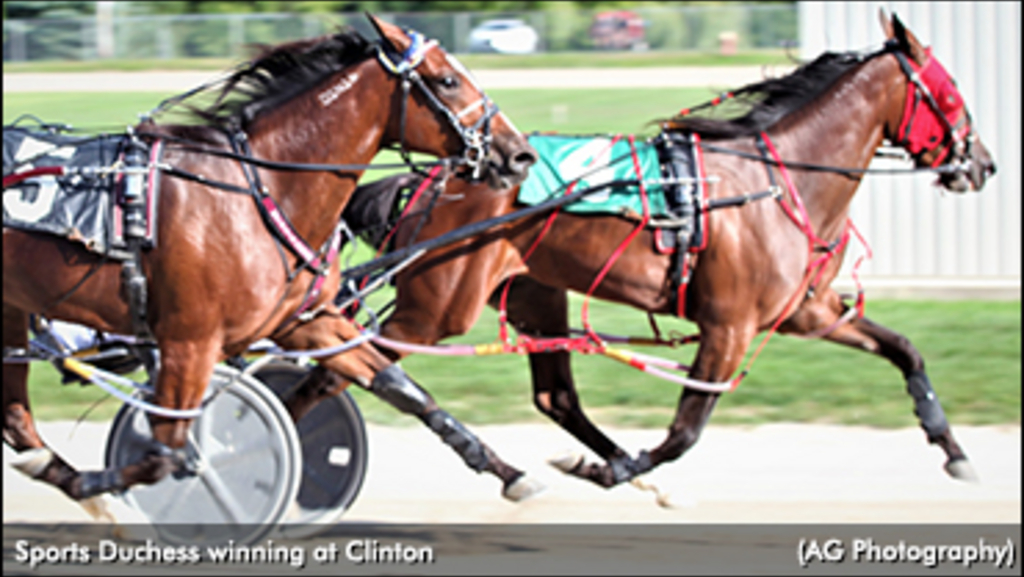 Bob McClure did not have much luck in the Charity Driver’s Challenge that kicked off a record-setting closing day at Clinton Raceway on Sunday (Sept. 6), but Canada’s leading reinsman finished things up with a natural hat trick in the last three $22,000 Grassroots events.

“When the first four horses you drive in a driver’s challenge are picked for last, you pretty well know that you’re not going to be a big threat,” said McClure with a laugh. “But it’s all fun, it’s for charity, we all had a blast. They always do a great job, the track’s always good, they always have competitive races, the whole thing is fun.”

Clinton’s leading reinsman Brett MacDonald triumphed in the Charity Driver’s Challenge, which raised over $7,000 for the Clinton Branch of the Royal Canadian Legion. Through the eight driver’s challenge races and four Grassroots divisions, Clinton Raceway fans wagered a total of $118,041, an all-time high for the half-mile oval.

After his driver’s challenge mounts failed to serve up a victory, McClure made his debut in the winner’s circle in the second of four Grassroots divisions for the two-year-old pacing fillies, guiding Sports Duchess to a gate-to-wire score from post 4. The favourite kept a stubborn neck in front of Siri Blue Chip at the wire to claim her first Ontario Sires Stakes win in a personal best 1:57.3. Celia Bayama was two lengths back in third.

“I think that’s the first time I ever drove a horse for Blake that was competitive, usually I’m fifth choice so we don’t usually have very much luck. It’s a running joke between us, he actually fist bumped me in the winner’s circle and laughed and said, ‘Hey look we got a cheque together’,” said McClure of trainer Blake MacIntosh. “But she’s real slick gaited through the turns, which helps at a track like that. She raced great.”

St. George resident MacIntosh trains Sports Duchess for breeder Leanne Murphy of St. George and her co-owner Stuart McIntosh of Essex, ON. The Sportswriter daughter started her provincial career at the Gold Series level before making the move to the Grassroots for the third leg. With Sunday’s win and a third in the Aug. 14 Grassroots event, she boasts 62 points and currently sits in a three-way tie for eighth in the division standings.

McClure was right back in the Clinton Raceway winner’s circle after the third division, making a bold three-wide move up the backstretch with CL Sportsextreme to grab control of the race and cruise home to a 1:58.3 victory. Miscues by Patina Seelster and Steelmeatreasure in the last quarter caused some confusion behind CL Sportsextreme, leaving Treasures Gem and Control The Thong to cross the wire 16 lengths after the winner.

“I think she was the best one I drove today actually, she was wicked. I mean we were five lengths off at the five-eighths pole, but when I moved her she was on top at the three-quarter pole, so she’s got a real good turn of foot,” said McClure of the Sportswriter daughter, who started from the trailing post 8. “She tries real hard for a little filly and she just motored around that last turn. I know there was some chaos going on behind me, but she won very, very easily.”

Dany Fontaine trains CL Sportsextreme for owner-breeder Ecuries C. LeBlanc Inc. of Saint-Eustache, QC. In six starts the filly boasts four wins, with three of them coming in the Grassroots program. With one regular season leg remaining, CL Sportsextreme is tied for top spot in the division standings with 150 points.

McClure finished the hat trick in the last division, putting Sweet Pink on the front heading by the half and cruising home to a three-length victory in 1:59.2. Sportsfire finished second and Shes Got It All rounded out the top three.

“She’s been a little bit of a project for Nick. When he first baby raced her I liked her a lot, she’s well-bred and everything, and then she made a break in the second baby race and I don’t know what it was about,” said McClure of the Nick Gallucci trainee who started from post 2. “She’s got quite a bit of ability and I think next year she’s going to really make some money.”

Gallucci trains the Bettors Delight daughter for owner-breeder Millar Farms of Stouffville, ON. Sunday’s win was Sweet Pink’s first in her four starts and gives her a Grassroots point total of 53, good enough for a share of 11th heading into the last leg at Woodbine Mohawk Park on Sept. 15.

Amini captured the other Grassroots division, sprinting from post 7 to take control of the tempo and hanging on for a head decision in 1:58.2. Chiefs Dream Girl finished second and favourite Betchuloveme was third.

Sylvain Filion piloted the Sportswriter daughter to her second Grassroots win for trainer Richard Moreau and owners Tess Waxman of Ridgeville and David Morgan of Hamilton, ON. With two wins and one second, Amini currently sits third with 127 points.

Driver’s challenge winner Brett MacDonald had the opposite experience to McClure, finding the winner’s circle twice in the early part of the card and missing the board with his two Grassroots mounts. In his eight challenge drives MacDonald posted two wins, one second, one fourth, one fifth and had one of his mounts scratched for a total of 148 points, eight more than runner-up Doug McNair. 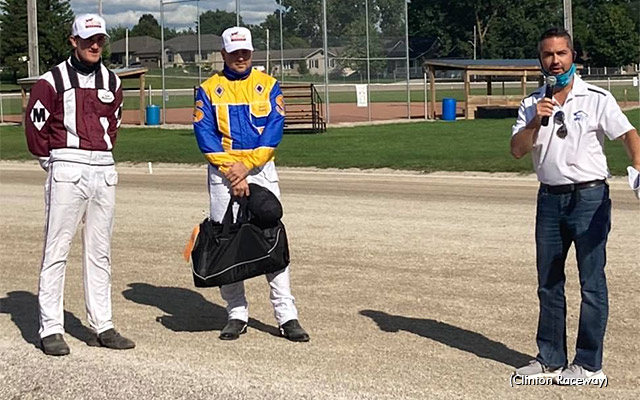 “It comes down to the type of horses you drive, especially when you drive with that many good drivers, the horses and the trips you get are how you win that type of thing,” said MacDonald, who led all drivers at the Clinton meet with 17 wins. “It’s nice to do something for charity too.”