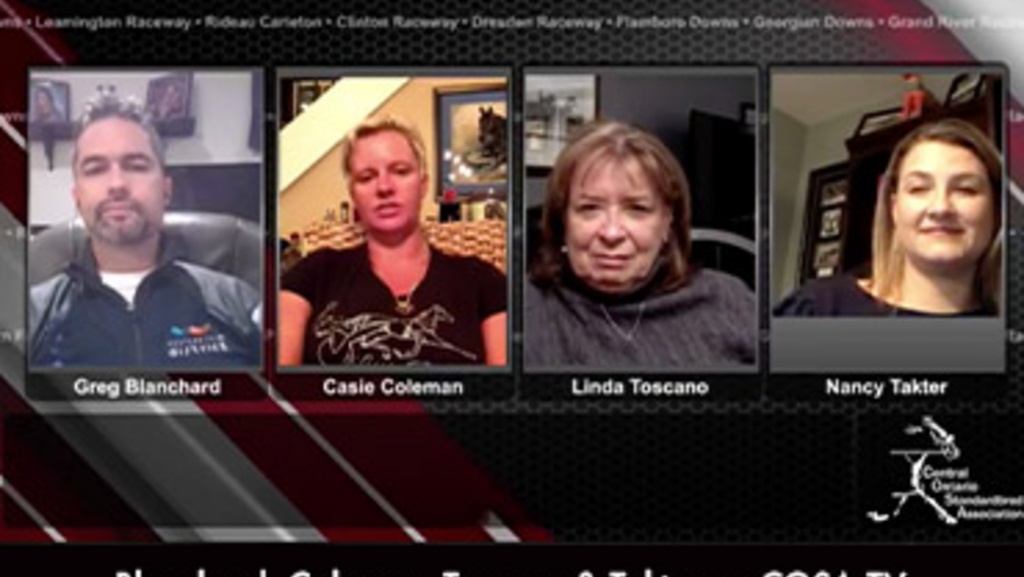 Three of the sport's most accomplished women – Casie Coleman, Nancy Takter and Linda Toscano – were featured on Wednesday evening’s (April 22) episode of COSA TV. The list of accolades between the power squad of women include North America Cup titles, multiple Breeders Crown victories, The Hambletonian and the Little Brown Jug.

The trio of ladies joined host Greg Blanchard to discuss memorable moments as well as keys to success, answer questions from fans and provide updates on how they are handling the COVID-19 pandemic -- which continues to put a halt to harness racing across North America.

Casie Coleman continues to play the waiting game in Florida before making the move back to Ontario.

“We were supposed to head back Monday but with everything going on I don’t think we will be leaving until the end of May. With no racing to go home to and not being able to ship into Mohawk to train and when we come home have 14 days to quarantine and American staff can’t come back into Canada so right now we’re going to hold fort with all the situations going on. I’m going to send a handful of horses to some of my Canadian staff but I’m going to be stationed here for a while.”

Nancy Takter, another trainer playing the waiting game, is eager to get back racing from her home base in New Jersey.

“It’s been chilly here but the sun was out today and that makes life a little easier right now but obviously we’re excited for a bit more warmer weather. I think warmer weather makes everyone want to be a little more inclined to be more ambitious. In a situation like this you really start to appreciate the little things in life.”

Similarly, Linda Toscano views the situation through ambitious eyes of getting back to racing as soon as possible.

“We’re in a holding pattern right now, I think everyone has stake races in mind right now. This really hasn't impacted my two-year-olds thus far because it looks like we might be able to keep a normal schedule with them so we have just been going business as usual with them. We had a really good winter. Usually we’re used to going to the barn in the mornings and then head to the races at night but that part is gone now.”

Blanchard took the trio of ladies down memory lane to revisit some of their most memorable moments.

Toscano, who has trained a long list of champions, reminisced on days of a horse who is most near and dear to her heart -- Jet Laag. However, there is another standout trainee that Toscano will always hold fond memories of and his name is Market Share, winner of the 2012 Hambletonian.

“He’s a funny horse, he’s the little horse that could. There’s nothing about Market Share that said he could do what he did in his three-year-old year. He wasn’t the best gaited horse in the world, he went like a mix-master up front, he didn't cover a lot of ground but he just needed to get their first. Going into the race I think we had a great plan, he was the type of horse that all you had to do was give him a target. The day he won The Hambletonian was a fairy-tale day for sure. After Chapter Seven, I didn’t think I would ever get another chance at that race.”

Takter continued the trip down memory lane by reflecting on capturing the one race her father, Hall of Famer Jimmy Takter, could not win in his illustrious career -- the North America Cup, which she won in 2019 with Captain Crunch.

“I think all I could think when he went off-stride was ‘get back on stride.’ I knew he was a good horse and I knew if he could just get back on stride quick enough he would still make the final and he did. If you watch the replay under a microscope you can see that it was the shadows that caused the break. So, we put a bigger shadow roll on him but I wasn’t really worried about it because the final went at night and there wouldn’t be any shadows.

“The night of the final Scott [Zeron] asked me if he was okay and I said to him ‘don’t worry about anything, he is the best horse in here so just go out and win this race,’ and after that...the rest is history. To come back and win the race after what happened to him in the elimination was very special and it’s the one race that I have won and my dad hasn't. Captain Crunch was a beautiful colt and did such great things, and I think he is going to be an awesome stallion.”

“Where he was sitting around the last turn it didn’t look good. The horse that was on front came home in :25.4 and Betting Line had to come home in :25.4 to catch him. He was a long ways away from the finish line and I have never been so confident going into a race that we could win but during the race I just kept thinking to myself ‘this is bad, this is bad.’ But it all worked out in the end.

“I’ve been fortunate to have some amazing horses but Betting Line is right up there too, he is bar none the best horse I have ever had. It’s too bad we didn't get to see what he could have done as an aged horse before he got bit by a spider and that ended his career.”

The episode of COSA TV was produced by Curtis MacDonald’s CUJO Entertainment and is available for viewing below.